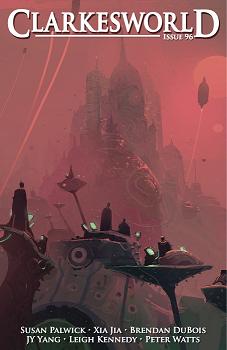 “Patterns of a Murmuration, in Billions of Data Points” by Jy Yang

“Weather” by Susan Palwick is a story about not only meteorological and emotional storms, but also the impact of a child’s death. Frank and Kerry, a couple who lost their daughter six months before translation, the ability for the deceased to be ported to cyberspace, became available, are visited by Dan, an unreliable fellow who can barely hold down a job. Dan wants to drive his rickety truck from Reno to Sacramento to see his daughter, Rosie, who is dying and about to be translated. An April snowstorm is his obstacle. Because of their own loss, and their differing feelings about it, Frank and Kerry are at odds and tread lightly around the subject while encouraging Dan to stay for breakfast rather than risk his life driving in bad weather. Finally, Frank has had enough of the tenuous emotional situation with Kerry and decides to drive Dan to Sacramento. That Palwick did not make this either a tear-jerker or an emotional brawl makes the story a much easier, if no less insightful, read. Although it centers on Dan’s imminent loss, that is a lens through which we see how Frank and Kerry deal with their own daughter’s death.

In the aftermath of a political assassination in which one of its mothers was collateral damage, Starling, the AI protagonist of Jy Yang’s “Patterns of a Murmuration, in Billions of Data Points,” wants answers. Here, the sides are Left and Right, with the Right being the perpetrators who murder the Left’s presidential candidate in such a way that they believe their involvement to be untraceable. This use of Left and Right as antagonistic forces hits close to home for at least current American politics. However, Starling has come to the conclusion that there is no difference between Left and Right ideologies. Nonetheless, the AI wants revenge for the death of its parent. While investigating the murder scene, Starling encounters an agent of the Right, Wayne Lee, who attempts to disable Starling using nanotechnology. Starling takes precautions against this, causing concern to her human Studio mates and remaining mother. Using all the resources available to it, Starling hunts down Lee with intent to kill him. The ending here was unsatisfying and too much in keeping with human sensibilities rather than those of an enlightened AI.

Peter Watts’ story, “Giants,” was first published February, 2014 in Extreme Planets: A Science Fiction Anthology of Alien Worlds. This is hard SF with bona fide science. During their ship’s pass near a gas giant, two shipmate adversaries must put aside their enmity in order to survive an alien attack. The source of their conflict is that one opposed the other during a mutiny some years past. That one is seen as the ship’s sock puppet and is not only untrusted, but also hated by every human on the ship. While this story is a sequel to Watts’ “The Island,” and takes place on the same ship, Eriophora, it stands alone quite well.