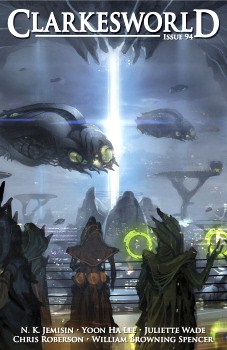 Procrastination is a wonderful word, full of meaning even when the meaning is ambiguous. Yoon Ha Lee, in “The Contemporary Foxwife” tells a tale of procrastination, and it is only at the end where we find out what task was truly being avoided. This story blends Science Fiction and Fantasy elements quite cleverly with a fantasy creature taking up residence with a university student on a space station. While the creature was mythical in nature, the true fantasy lay in the idea that a university student would be reluctant to have on hand a free live-in maid/bomb de-fuser. There are small technical issues in the writing that I can easily overlook, and I never did find out what a Foxwife really is, but none of that matters in the end. This is a nice story that is worth the read.

In N. K. Jemisin’s “Stone Hunger,” the girl from Arquin (we never learn her name) discovers that revenge is, indeed, a dish best served cold. This is a richly appointed fantasy world, with enough world-building to host a vast array of stories. Sometime in the past, this world suffered a cataclysm that fractured not only the landscape, but society as well. The girl in question has had her entire life upended, and has been forced to exist on the fringes of civilization, feeding on the remnants of destruction. Each character in this story has their own secret motivation for their actions, and each follows them in a consistent way. A lot of questions are raised, and few answered. These are the kind of stories I live for—enough conflict and resolution to sustain a good yarn, and enough new questions to keep me guessing at the rest of life in their world. Recommended.

Pelisma is a woman, aging and slowly losing her sight, who has saved her people once in the past and might well again in the future. The Wysps have their reasons for driving the colony of humans underground on an unnamed planet, but it is up to Pelisma to find out not only why, but how to live with them. “Soul’s Bargain” by Juliette Wade, is a well-wrought tale of discovery that satisfies on many levels. The one complaint I have is the ending. Too much of an attempt is made at answering all the questions, and not enough is left for the reader to ponder. In the end, however, this is a simple—and well told—first contact story. Even though we meet only two major characters (three if you count the Wysps) there is enough of a world here to make the whole seem tangible. There are other questions, such as: Why does an obviously advanced technological society still adhere to superstition? But you could ask the same thing about the 21st century U.S. Still, this is a nice little tale, and I thoroughly enjoyed the protagonist. It’s not every day that a nearly blind old woman saves the day.