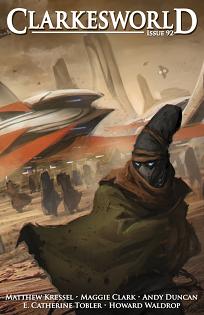 “The Meeker and the All-Seeing Eye” by Matthew Kressel
“A Gift in Time” by Maggie Clark
“Migratory Patterns of Underground Birds” by E. Catherine Tobler

“The Meeker and the All-Seeing Eye” by Matthew Kressel is an excellent story of a single huge creature, the Eye, roaming the universe with its story telling companion, The Meeker. The Eye is capturing stars as it goes. In their wanderings they come across an ancient artefact containing enough information to re-create a human woman called Beth. She has an interesting story but, before she is able to tell it, she dies. This story intrigues the Eye and it recreates Beth again and again trying to find out the end of the story and each time Beth dies before she can reveal it until, after billions of attempts, the truth starts to appear.

This story is very entertaining, right from the start. You get a strong insight into these odd creatures with huge life times and some hints at all sorts of interesting cultures they have come across. The ending is excellent although the final telling is a bit clumsy compared to the excellent writing before it. I recommend this story – it’s definitely worth reading.

“A Gift in Time” by Maggie Clark is a tale of Mouse, who wants to be noticed and even loved by his boss, Ezra Levitz, but as his name implies, he is a timid person. But Mouse is also a time traveller who rescues items, both ancient and recent that have been lost at some time or another. Mouse has presented a copy of Beowulf in the original Anglo Saxon to Ezra, but it has not aged and hence Ezra believes it to be a forgery. Similarly, Mouse presents Ezra with an original film he has rescued from a blaze at Fox Studios in 1937, but Ezra is still not impressed, so Mouse takes even greater risks to retrieve yet another item.

This story is interesting enough but the style of writing is somewhat dense and a bit confusing in places. There are several indirect references to people in the speech and sometimes these make it hard to follow exactly what is happening. But the presentation of time travel is interesting and quirky and the story has an appealing innocent air to it.

“Migratory Patterns of Underground Birds” by E. Catherine Tobler is the story of an unnamed woman wandering in a post apocalyptic world full of bunkers, some containing dead people, some empty but with evidence of death, and where lights appear in the sky with some sort of link to the disappearing people. She moves on from each bunker, never staying for fear of losing her own life. At one point she sees someone in the distance. She follows but when she gets to where they were standing she finds a footprint but nothing else. Later, she comes across another man who also disappears as she gets closer.

This is not the usual story based on the plot of overcoming the monster. Instead it is an atmospheric tale of a journey. The story itself is well written and compulsive, especially at the points where she sees another person, but the ending leaves many questions open and so not to everyone’s taste.