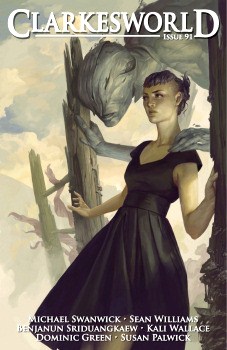 Clarkesworld’s April issue features four new stories, all with concepts that are out of the ordinary.

“Passage of Earth” is about Hank, a backwater medical examiner whose ex, Evelyn, shows up in the middle of the night with a corpse to autopsy – an alien corpse. It is a mysterious wormlike being, and Evelyn is coy about everything about it. The story starts out like a CSI autopsy episode, but halfway through takes a turn into strangeness. Michael Swanwick has a good eye for character and has portrayed in a realistic manner and alien race that is more than it seems at first. I also liked the pun in the title.

Benjanun Sriduangkaew is next with “Autodidact,” set on Srisunthorn Station which turns dead stars into intelligent spaceships. Nirapha is there after his planet is destroyed and volunteers to help with the training of one of the ships, Teferizen’s Chalice Principle. The two, along with the soldier Mehaan, begin to develop a relationship that helps Nirapha to deal with his situation. It’s a very imaginative concept, but I found the execution too talky and found it hard to really sympathize with the characters, since their backgrounds had too many pushbutton emotions.

“Water in Springtime” by Kali Wallace features a young woman with some out-of-the-ordinary powers. Alis travels a barren land with her mother, who is something of a healer, and who introduces her to her ability to have her consciousness merge with water to travel and see places where the water flows. The story is one of discovery and revelation, nicely done, but a bit too subdued to really engage me emotionally.

“The Cuckoo” is set in a world where transporters are the main method of travel and is primarily the description of a mysterious April Fool’s Day prankster who plays tricks on people who use the device that day. It sets off memes and speculation that slowly begins to reveal itself. Sean Williams manages to make a story of pure, dry description of events interesting and with some serious points about the development of intelligence. I even found the ending – which featured something I rarely like – very satisfying.