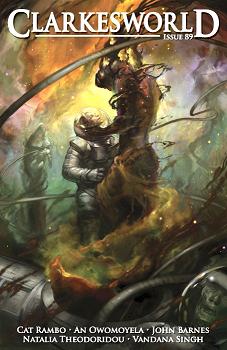 “Tortoiseshell Cats Are Not Refundable,” by Cat Rambo, is about grief assuaged by cloning the deceased. Most stories like this end up being horror trips, but this one took a pleasant turn towards new beginnings. Anthony’s wife died in a freak boating accident, and he struggles through existence as if in a fog. His widowed mother is the only close family he has, his father having died long ago and his sisters distant. When he decides to clone his mother’s recently deceased cat, he learns there’s an experimental option to clone his wife.

This is a low-key story with an intriguing idea presented at the end. However, I believe this tale could have been much more compelling if it had focused on Anthony’s struggles with his cloned wife to redefine their relationship, instead of spending so much time following Anthony as he prepared for her return.

In Natalia Theodoridou’s “The Eleven Holy Numbers of the Mechanical Soul” Theo has been stranded for years on Oceanus—a dying planet consisting mostly of ocean—and only has his animal constructs for company. Daily existence is a struggle, not just to survive physically but to remain sane. I don’t think he managed, nor did I ever figure out what the eleven numbers stood for, unless they were a kind of mantra Theo used to stay focused, sort of. Sadly, when one of Theo’s animal constructs rescues him from quicksand, the story immediately abandons that event without developing it any further. Weird, surreal, nihilistic. Maybe that’s its only point.

“And Wash Out by Tides of War,” by An Owomoyela, is about Aditi’s anger towards her mother who’d left her when she was only three to fight in an interstellar war as a hhaellesh, an alien warrior construct. Except her mother hadn’t anticipated that her father would die soon after she left. Aditi lives on a colony world designed for freerunning: “that’s what comes of a government that worships the hhaellesh, who can carve their own path through the three dimensions.” The only remembrance she has of her mother is a small pendant of her mother’s cryopreserved blood . . . until the war is won, and her mother returns, asking for the pendant so she can be transformed back into a human. Back into her mother. Funny thing about anger, it’s addictive, especially after years of holding it close. Aditi doesn’t have memories of a warm, loving mother so can’t envision embracing something she never had. Consequently, letting go her anger will require a trade-up to something even more intense but equally personal—all hers.

I loved this tale and the intensity of Aditi’s struggle with her emotions that are spun out and explored in increasingly more dramatic story arcs. It allowed me to feel her anger and identify with it, which made the final twist of her decision all that sweeter. Nicely done. Definitely recommended.