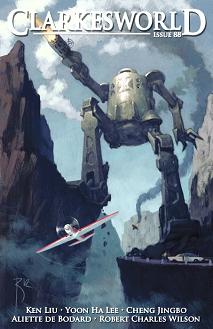 “The Clockwork Soldier” by Ken Liu transitions from a ship travelling at hyperspeed to a text-based adventure game that the prisoner on the ship has written for his bounty-hunter captor. The first transition feels a bit rough, since it also jumps back in time. But after that first hiccup, the story really pulled me in. I really enjoyed the text adventure sections, and it’s a neat device that I haven’t seen used before.

“Grave of the Fireflies” written by Ceng Jingbo and translated by Ken Liu follows humanity’s flight from their dying sun. The writing is beautiful, with evocative, lyrical prose, but I had a hard time following the plot, until the last section when everything is explained in one lump of exposition. The protagonist was also a bit passive.

In “Wine,” by Yoon Ha Lee, transgendered general Loi Ruharn investigates the deal that his lover made with a group of mercenaries to defend their home world from invasion. The world is interesting and dark, and the main character is active and engaging. The distant point of view lessened the emotional impact, but the ending was satisfying.