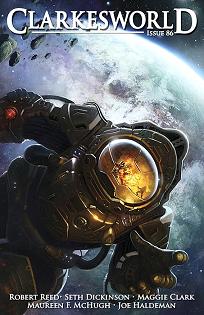 “The Aftermath” by Maggie Clark

“Mystic Falls” by Robert Reed is a bit of a riddle, wrapped in a mystery, inside an enigma – and very aptly named. It takes place in the near future, where our daily lives are automatically recorded and uploaded for us, allowing us to relive the memories, down to the smallest detail. But it seems that there is a worldwide virus invading everyone’s memories: the “perfect” woman, whom everyone recognizes somehow, and whom everyone encounters at some point in each day. The encounters are benign, and the woman is always kind and friendly. An unnamed security agency tries to discover who or what this virus is, and who planted it and why. And while this makes it sound like something of a high-tech mystery thriller, the story is told in a much different style, leading us slowly through the mystery. We are given few specifics, especially at the beginning, and by the end we are left with only our own deductions as to what really happened.

I was certainly drawn in by the mystery, and the tale was well-told. Readers who appreciate a story that is open-ended, and that leaves them scratching their head a bit, will enjoy this one.

A good twist on the usual alien abduction tale, “The Aftermath” by Maggie Clark is the story of, well, the aftermath of one such abduction. Told in a distinctive narrative style, we are privy to the abductee’s thoughts as he tries to mentally process what happened, navigate his return to Earth several years later, and how to cope now that he’s back. The story is tightly written, with just a hint of wry humor and an ending that made me smile.

“Never Dreaming (In Four Burns)” by Seth Dickinson is a uniquely told story of two female rocket scientists, one of whom, Nur Zaleha, is dying of a rare genetic malady that will eventually cause her to stop dreaming, which will lead to psychosis and death. Oh, and she has an “angel” for a friend – actually, a being from another dimension – named Tariune. Nur and her co-worker and friend, Siv, are trying to solve a glitch in Nur’s new engine before Nur literally loses her mind. Tariune is also trying to get her to come to his universe before she stops dreaming, because only through dreams can she travel there. Nur is torn – should she stay and “make a difference” in this universe, or go to Tariune’s universe, where magic (or at least non-causal physics) is real and she won’t lose her mind?

Dickinson does a good job with the relationship between the two friends, and also keeping the reader in some doubt about Nur’s sanity, regarding Tariune. The structure of the story definitely added to the narrative – a more traditional style wouldn’t have had the same punch. I particularly liked the last “burn” that ended the story.