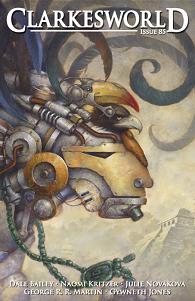 “The Symphony of Ice and Dust” by Julie Novakova

“The Creature Recants” by Dale Bailey

“The Symphony of Ice and Dust” by Julie Novakova is a story within a story. We begin in the far distant future on a ship, the Orpheus, nearing a planet far from the sun. The purpose of the ship appears to be composing music based on the crew’s experiences in space, though this is only inferred, as we are given few details. When they arrive at the planet they find two ships buried in the ice of the planet – one is of human design, but ancient (to them), and the other is alien, and even older. After drilling down to the human ship, they find two dead bodies, in cryo-chambers. They find the ship’s log and download it, which begins the ‘inner’ story, about how the two humans came to be stranded on this planet. This is a pretty standard early space exploration story, with the only twist being the two explorers are husband and wife. At the end of this story, we switch back to the original characters who are able to regenerate parts of the dead humans’ brains, and extract a few sentences, which they incorporate into their symphony.

Overall, this felt like the author had two ideas for stories, but they were too short, so she attempted to hook them together somehow. I found the ‘outer’ story more intriguing, because of the nature of the people on the ship (the Musician, the Thinker, and the Aesthete), but it was the least fleshed out. Subsequently, the ending lacked the emotional punch it could have had, because we didn’t know enough about these people and their journey.

Lastly, the author should look up the proper use of “less” and “fewer.” On more than one occasion, “less” was used when “fewer” was the proper adjective. This jarred me out of the narrative each time.

“Bits” by Naomi Kritzer is a fun little story about the sex toy business, especially how it relates to human/alien sex. In this case, the sex toys are sensate (“IntelliFlesh”), and can be attached anywhere on the body. The aliens are the K’srillan, squid-like beings who arrived on Earth a bit over a year prior to the story’s beginning. The K’srillan were fleeing their exploding sun, and have been (mostly) accepted into human society. Some humans welcomed the K’srillan a bit more enthusiastically, actually marrying them. But, of course, the sexual anatomies are not compatible – hence the need for sensate sex toys, but no company currently makes them. So, our protagonist, who works at a sex toy company, sets off to remedy the situation. The story is light-hearted, funny, and has at least one brilliant pun which I’m not sure the author intended, but it made me laugh out loud.

The premise of “The Creature Recants” by Dale Bailey is that the Creature of The Creature from the Black Lagoon was a real, sentient creature, captured in the Amazon and eventually taken to Hollywood. How he ends up ‘starring’ in a film, his interactions with Boris Karloff and Bela Lugosi, and his growing attraction to the female lead make for a good tale, but the prose is a bit clunky at times, especially in the beginning: there’s an awkward sentence fragment, and the use of “prized” instead of “prised.” By the end, perhaps because Bailey is dealing with the Creature’s deepest feelings, the writing is much smoother, and I was able to empathize with the Creature. So, while perhaps not the most smoothly written tale, nor the most original premise (I was reminded of Shelley’s Frankenstein on more than one occasion), by the end we have a fairly decent tale of what it means to be human, what love means and what love can cost.