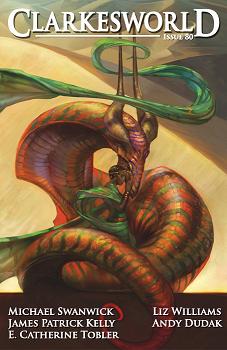 James Patrick Kelly’s “Soulcatcher” has (in my best fan boy, gosh-wow mode) a cool idea reminiscent of the Phantom Zone of Superman lore, but rather than imprisoning the bad guys in a high-tech limbo, the “soulcatcher” of the title refers to a uniquely engineered carpet of rare design and properties that holds only the living heads of those rewarded with a life sentence, for capital punishment has been outlawed. The heads exist in a sort of amniotic fluid surrounded by the clear membrane of the soulcatcher carpet. Macabre to say the least, but what a neat sort of imprisonment. Delightfully ghoulish.

The story centers on a young woman named Klary who runs an expensive, avante garde art gallery, which is a front for her deadly scheme to entrap and imprison the ambassador of the Four Worlds who comes to her gallery to shop for something exotic. The ambassador has enslaved her clone sister as a literal pet (diamond leash and all) some time in the past, and Klary is now ready to wreak her revenge on the ambassador and reclaim her sister. Something goes wrong and almost wrecks her careful plan, but at the end there is confusion between the sisters as to how Klary’s plan wasn’t as secret as she had thought. Klary then troubles over an unreadable expression in her freed sister’s eyes… I think I understood the implication in the last line, but wasn’t entirely sure. In any case, if nothing else, the cool soulcatcher carpet was worth the entire 3,117 word ride.

Set in China, Andy Dudak’s “Tachy Psyche” gives a glimpse of a man–a secret agent of some indefinite sort–in the final moments before his death by gunshot. The agent has acquired special powers, however, which are explained thusly:

“He remembers his modification, deep in the bowels of a qingbaochu somewhere between Lhasa and Chongqing. All the agents endured it. After two months of psychedelic torment, they emerged with strange new powers. The one that would be their downfall was considered the greatest: acceleration or deceleration of thought, at will. The former would give them initiative in split-second decision making; the latter would speed them through isolation or torture.”

The story takes place through the agent’s eyes while he is in an accelerated mental mode, while he watches as the gun’s projectile makes its way toward him at a glacial pace. His final thoughts, where we learn of his recent background and what has brought him to this point in time, then the  philosophical acceptance of his fate toward the conclusion, comprise the bulk of this short 1,300 worder. The outer storyline is purposely vague and sketchy, channeling reader attention to the agent’s meditations, which the author manages to make reasonably interesting, if somewhat fatalistic.

“(R+D)/I=M” by E. Catherine Tobler treads well-worn ground, that of mankind inhabiting a new world without regard to (or in this case lack of understanding of) the indigenous inhabitants, but does so in a captivating manner. At times charming, even whimsical, the tone soon turns dark as the real message hits home.

Man has terraformed Mars to such an extent that at least small plots of land are capable of growing grapes, which the local Martians (who appear for all the world like individual grapevines) enjoy eating undetected. Eventually a pair are captured and held for observation, but unaware of their unique physiology the humans don’t realize they are slowly killing them, for sunshine is their water and other than the grapes, they can’t digest human food. Long story short, they are telepathic and invade the minds of several humans to see what it is like to be human. Standing before a Martian council they relate their experiences regarding the humans, deciding that they must go–be killed as trespassers, which they are. Portrayed as fun- and life-loving aliens, we sympathize with them and their capture. And even though the humans wish them no harm and only desire to observe and study them, humans are a real threat to their existence and must be terminated. So when the next rocket appears in the Martian sky…

Though an old (but worthwhile) theme, I liked the author’s aliens, their joie de vivre, and could understand their final decision regarding the invaders from another world. While the humans held no ill intent toward the little grapevine-looking Martians, they nevertheless were a threat that had to be dealt with in no uncertain terms.

Authors are often asked where they get their ideas. In this case I can easily imagine that Ms. Tobler might respond with a wink and a nod that she got the idea for her aliens by, as the song goes, hearing it through the grapevine. Sorry.

Dave Truesdale has edited Tangent and now Tangent Online since 1993. It has been nominated for the Hugo Award four times, and the World Fantasy Award once. A former editor of the Bulletin of the Science Fiction & Fantasy Writers of America, he also served as a World Fantasy Award judge in 1998, and for several years wrote an original online column for The Magazine of Fantasy & Science Fiction. Now retired, he keeps close company with his SF/F library, the coffeepot, and old movie channels on TV.