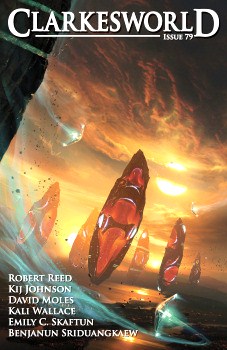 “Annex” by Benjanun Srisduangkaew
“No Portraits on the Sky” by Kali Wallace
“Melt With You” by Emily C. Skaftun
(Editor’s note: this issue includes several reprints which are not reviewed.)

The first story in this month’s Clarkesworld is “Annex” by Benjanun Sriduangkaew, following the curious journey of two compelling alien entities. The multi-bodied Esithu crosses paths with the vivacious and intriguing Lykesca, who has elaborate ideas to subvert the hegemony threatening their homeworld. For the most part, this is a sophisticated character-driven story, with rich themes of culture and technology.

But despite its strengths, I’m not head over heels. I feel torn by shaky world-building, exacerbated by several nonsensical abstractions and descriptions. For example, “Onstage a dancer moved in simpatico, mercury limbs shimmering silver, a body of animated liquid.” This is beautiful but ambiguous. Given the fantastical setting, mercury limbs could imply both the fluidity of movement and a literal body modification.

“No Portraits on the Sky” by Kali Wallace is almost good, and the strongest of the three in terms of concept and themes. Rela is a forest dweller, living in a troubled world that’s literally falling apart. She is disturbed one day when a stranger falls from the sky, becoming the subject of her intense curiosity. At its heart, this is a story about death and dying, and an original one at that. The story flows well, and its prose is striking.

But as with the first story, I have bugbears. The narration is too artificial and inconsistent, coming out with all kinds of expositional information readers need to know, but that no such narrator would say. The result is a world built from telling and over-description. This works in places, but overall it’s a great pity. Had this been less contrived, it could have been very special.

The final story of the issue is “Melt With You” by Emily C. Skaftun, a tale of reincarnation, war and the afterlife. The inanimate – in this case plastic garden toys – are in fact animate, and at war with the garden gnomes.

The absurdist style is amusing, and the flow is effortless. However, I have a problem with this story – the past tense is confusing, given the narrative’s final events and make this a very unlikely telling. But out of the whole issue, it was the one that made me smile; despite its problems, it’s the most touching of the three.