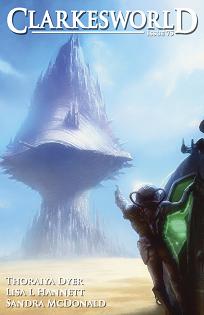 “Your Final Apocalypse” by Sandra McDonald

“The Wisdom of Ants” by Thoraiya Dyer

This issue presents three female writers who give us excellent stories written in something other than third person point of view (POV).

I have a soft spot for second person POV stories done well. Some may be most familiar with this POV from tabletop role-playing games or Create Your Own Adventure stories. “You (not he or she, which would be third person, or I, which would be first) turn the corner and are surprised by a band of orcs.”

Sandra McDonald makes this POV work in “Your Final Apocalypse.” After a brief introduction to who you are not, her narrator details salient points of your life. Though you never find out as much about him, her, or it, you learn that your name is James; you’re twenty-five; and, you’re skipping out on your study group. You’re sitting in the quad on a college campus, watching a female art student, Mary Susan Williams, and deciding whether or not to approach her. And so it goes from your beginning to “Your Final Apocalypse.” The ending has a nice twist that will leave you hopeful.

“The Wisdom of Ants” is a first person POV account of a clan that has learned to live in harmony with its harsh environment. Precious vials of bacteria allow clanfolk to eat foods that would otherwise poison them. The fauna includes metal-eating ants that also form nests which the clan harvests for trade. During one such harvest, Thoraiya Dyer’s protagonist, Quiet-One, encounters a dying refugee who is willing to barter information for a single vial of bacteria. From this visitor, the people learn how their trading partners have been deceiving, exploiting, and planning to kill them.

After ritual and reflection, the clan’s leader, Rivers-of-Milk, decides there is nothing to be done but for the adults to retire to some caves to die so that the children can live. She relinquishes her leader name, promoting her daughter, Quiet-One, to Rivers-of-Milk. What happens next is not unexpected. However, its predictability in no way diminishes the story.

Lisa L. Hannett gives us “Sweet Subtleties,” a fitting title for a story about a French confectioner, Javier, told in first person POV, through the eyes of his exquisite confectionary creation, Una Belle. She regales us with Javier’s painstaking attention to detail as he prepares her for one event after another—some as centerpiece, others as dessert. A beautiful candied treasure, Una is a fantasy that becomes what her audience wants her to be. Her sweets are plentiful; her subtleties so divine that we are drawn in, mouths watering in anticipation of what she will become next. When Una leaves us, we are well sated and eager to see her again. It is not until the end that we realize just how special Una is. A sweet read.