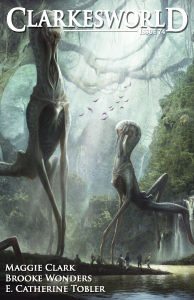 “(To See the Other) Whole Against the Sky” by E. Catherine Tobler

“Aquatica” by Maggie Clark
“Everything Must Go” by Brooke Wonders

With these three very interesting stories, Clarkesworld continues to showcase very good fiction that should not get lost in the shuffle of so much other genre short fiction being published today.

“(To See the Other) Whole Against the Sky” by E. Catherine Tobler takes place in a future when Earth has colonized numerous planets. Earth’s leaders have found that ships crewed by a single person, rather than a crew, work best to avoid tension and madness. The un-named protagonist is one of those loners. At their point of origin, ships are paired so that communication is possible until distance becomes prohibitive. It is this dynamic which fuels the story.

The story is written in a stream of consciousness style from one side of the deteriorating efforts at communication. It is not only a very honest portrayal of loneliness under the worst possible conditions, but also takes the world of computers and the web to the absolute. However, it works only if you tend to enjoy fables rather than reality. While very much an SF story, what it has to say is right on the money–apropos for today. At its heart, the story’s message, while involved with individuals, is meant for humanity as a whole. Thus it feels like a teachable fable—one from which we can all learn, but not one that will be long remembered.

“Aquatica” by Maggie Clark takes place on an ice-covered moon but with liquid water underneath (perhaps Europa or another moon of Jupiter or Saturn). The indigenous lifeform is a huge tentacled fish/octopus type of creature. It lays eggs and all the female fish in the area wait till they are born. The females roam free while the males latch on to the larger mothers until they are immersed inside to impregnate another spawning. One small male overhears the mothers talking and decides to run from any lure they may send. A Mom is intrigued by this male going against all his own instincts and decides to help.

The story follows these two trying to help each other get to a crack in the ice above which forms a waterfall into the ocean. The female works to keep the male alive without allowing him to merge with her while the male keeps the forward momentum, the desire to get there alive.

It’s an interesting situation but unfortunately told with the desires, voices, and gumption of human beings. There needs to be an alien mindset within this interesting setting for it to retain its own inner verisimilitude. That said, it would make a great cartoon for kids asis.

“Everything Must Go” by Brooke Wonders is truly terrific. It tells a very simple story about the disintegration of a modular family—Mom, Dad, Brother, and Sister. However, it shows that breakdown through the lens of “surrealism,” “the interstitial,” “fairy tale,” or “horror”—take your pick. To explain, let me share an excerpt from the first page following the death of the family dog:

Two thick branches of English ivy pull away from 1414’s exterior and wend their way around the corpse. The rusted hinges of its cellar-door croon a lullaby of creaks and whines as they gape wide to receive Lucky. The house pulls the vine-choked body deep inside its walls. Tucked between sheets of plaster and insulation, the dog mortifies; soon the basement reeks of decay. Upstairs, a girl mourns her lost pet.

The first image in the story is of a house in a decaying neighborhood introducing death and rot in its foundation. The dysfunctional family members continue down their various paths. Mom and Dad don’t talk unless the kids are asleep and then they argue. The girl is anorexic; all the boy wants to do is escape. Soon he begins growing long black wings which Mom, ever the craftsperson, tries to cut off at night with her sewing shears. Dad’s bottles of liquor slowly become black holes as various members of the family find their hiding places.

And that’s just a taste of how both house and family are disintegrating. Everything is skewered in a very sad, but truthful manner. Somehow the story becomes a commentary on not just this family but also on the “greatness” of a nation that is shown in its emperor’s new clothes. One has either to laugh or cry.