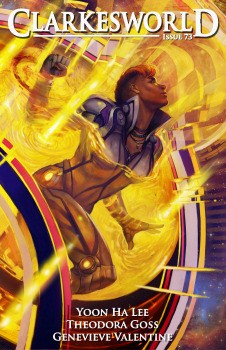 “A Bead of Jasper, Four Small Stones” by Genevieve Valentine
“England Under the White Witch” by Theodora Goss
“The Battle of Candle Arc” by Yoon Ha Lee

This issue presents three strong stories on the theme of: the right to fight.

It’s difficult to carry on a relationship when distance is measured in light years, and communication comes with almost an hour’s lag. Genevieve Valentine’s story, “A Bead of Jasper, Four Small Stones,” shows us one such pairing. Henry, a loner, is a resident of Europa, a place where humans hope for a second chance in the aftermath of Earth’s decline. Preetha, still on Earth, chides him on a private comm channel for a rude comment he voices about the name of the latest refugee ship that is launched. Henry responds with a genuine apology. Gradually, the two get to know each other as well as they can under the circumstances. Although Henry and Preetha never meet or say the three little words, this is, nonetheless, a well-done science fiction romance.

“England Under the White Witch” follows Ann through a perpetual winter brought about by a self-styled Empress. Theodora Goss gives us a time of war when men have gone off to fight, leaving the women behind to make do as they can. We watch as Ann’s mother, a seamstress, loses her job for being impertinent. To feed her family, she joins the military and serves the Empress. When she is old enough, Ann follows in her mother’s footsteps. By now, using might and magic, the Empress has expanded her arctic domain. Ann’s hard lessons about life, love, and loyalty show us how collaboration condones corruption. This is a solid tale of life under a conqueror. It has good character development. The magic, however, seems to be incidental rather than essential.

“The Battle of Candle Arc” by Yoon Ha Lee tells the story of General Shuos Jedao as he leads an unfamiliar troop into battle against superior forces. At stake are the remembrances of the high calendar, against which rebellions are considered heresy. Having survived an assassination attempt that leaves him in constant pain, Jedao must contend with subordinates whose military discipline may be the only reason they follow a leader with untried and unorthodox tactics. Despite his intractable pain, Jedao develops a strategy and commits his resources to a course of action that appears questionable. Once put into action, the plan’s effectiveness wins him more than the enemy engagement. The only disappointment with this story is that it feels like it should be part of a longer work.