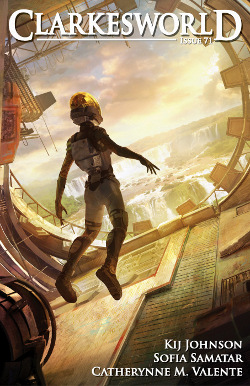 This issue of Clarkesworld offers three dark stories of  depth and intelligence—the type you can’t just skim or you won’t understand what’s going on, but you won’t want to skim anyway because the writing is so beautiful. They’re all well-suited to the podcast format, which is offered in addition to the written one.

“Mantis Wives” by Kij Johnson is a unique, strange piece, almost more prose poetry than story, complete with small praying mantis icons that separate its paragraphs just as surely as the bodies repeatedly dismembered throughout it. It begins with the quote, “As for the insects, their lives are sustained only by intricate processes of fantastic horror,” and goes on to describe various colorful ways mantis wives might kill their husbands. I find it fascinating how much death and horror can be sublimated through observing it in the context of this story.

The piece is short, and worth a read for the visuals and the language alone, although comparisons to human relationships could easily be drawn. The comments to this story also provide some interesting interpretations.

“Honey Bear” by Sofia Samatar merges fairy lore with a dystopian future. It begins with a seemingly normal family trip to the beach; the narrator wants to show her daughter the ocean, and her husband worries about getting to the hotel in time to get their cooler items into the refrigerator. Bit by bit, though, we see that nothing is normal. We learn that a glassy white slick is killing off ocean and plant life all over the world, and frequent births are a thing of the past. We learn that the husband’s worry is more than just a passing concern; it’s a pervasive despair that has him crying in the dark each night. The narrator reads her daughter stories of fairies and flowers, although flowers no longer exist. What does exist are fairies…but in a form and a future much more sinister than the lore ever hinted.

This story is well done—it gave me the chills, and the tone of it sat with me long after I’d finished. It’s subtle enough that it improves on multiple reads. The contrast between the voice of the story, which is full of love and optimism and a reaching towards life, with the utterly bleak future shown here, creates tremendous emotional tension.

“Fade to White” by Catherynne M. Valente offers an alternate history of a United States in which World War II didn’t end with a clean American victory—in fact, it didn’t actually end, and the war against Communism continues. Joseph McCarthy is president, the western part of the country is a sea of radioactive glass, and the people are herded into rigid roles that maintain the appearance of pre-war lifestyles. We’re given the point of view of two fifteen-year-olds facing a regimented coming-of-age: Sylvie is to be presented and tested to see what social stratum of Husband she’ll qualify for, and Martin is to find out whether his sperm count merits him a role of Husband and father, or a place on the radioactive frontlines of war. Sylvie resists the social structure, and Martin embraces it—but both are equally trapped.

I normally don’t enjoy stories as dark as this one, but the writing here is simply breathtaking. I generally feel humbled whenever I read anything Valente has written, and this story is no exception. I recommend it without reservations as an example of true mastery of the craft, in which every word matters in an intricate weaving of a work of art—as well as just plain great storytelling.