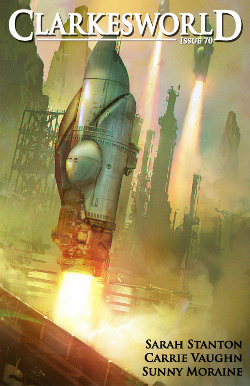 There’s a bit of a theme going on with this month’s Clarkesworld: stars.  Whether hidden by smog and recreated by holograms, lost to the past or giving us hope for the future, stars guide us through this month’s stories.

“Astrophilia,” by Carrie Vaughn, is one of those post-apocalyptic pastoral stories like John Christopher’s The Tripods or Margaret Atwood’s The Handmaid’s Tale.  In the story, society has been reduced to a low-tech level of subsistence farming thanks to the “big fall”.   Procreation is tightly controlled, with children allocated only to the most successful and productive households.  Stella, our protagonist, leaves her failed family farm to join a more fertile one.  There she meets the young and mysterious Andi, who spends most of her time tucked away in a shack on the hill.  What’s in the shack on the hill, and why does the household disapprove of the time Andi spends up there?

The story is told well enough, but it’s a pretty conventional plot and there’s nothing surprising in it other than a lesbian relationship and a pun in the title.  And if you’re the sort to be surprised, entertained or shocked by either, then you need to get out of the house (or the closet) more.

In her story, “The Switch,” Sarah Stanton takes a very simple question — what if we could hide reality behind a hologram? — and lets its consequences play out in a fascinating setting: China.

When in China, there’s an omnipresent sense that the government is more interested in appearances than reality.  In “The Switch,” the appearance has become all-important, as the government has cloaked Beijing in a haze of holograms.  The holograms conceal collapsing houses, ruined streets and the ever-present and all-encompassing smog behind a façade of clean, beautiful streets and clear blue skies.  I think Stanton’s science fiction premise and the ideas she plays with are very relevant to our contemporary setting.

Our strange subversive heroes travel the city in their spare time, transforming the appearance into reality by restoring the broken buildings hidden in the holograms.  Will they succeed in turning fiction into fact?  Is their ambition to big?  Is the appearance as important as the reality?

I thoroughly enjoyed “The Switch” and I think Stanton has taken an excellent idea and let it play out well.  I liked the writing, but I thought it tried too often for poetry.  Sometimes this worked, and sometimes it seemed incongruous.  For example, when an old man gives a hacking smoker’s cough, it’s filled with “sound and fury,” recalling the reader to the famous lines from Macbeth, only without the same depth of meaning.  It’s a million-dollar metaphor employed for a one-yuan task.  That said, I thought this was a well-written story exploring some fascinating ideas.

“Iron Ladies, Iron Tigers” by Sunny Moraine tells the story of Vita.  Vita is bound by intimate cybernetic systems to her ship and its AI, CERA.  Vita finds herself lost in the void, and much of the story consists of Vita trying to repair her ship’s sensors so she can discover where she is.  This is interspersed with flashbacks, where Vita recalls the past choices that have led her to this place and the past love she ran from.  This latter thread is the target of the title’s reference to Frank R. Stockton’s famous short story “The Lady, or the Tiger?”

I didn’t enjoy the story very much.  The flashback format seemed forced and unnatural.  Vita’s in the middle of an emergency, but she still takes the time to interrupt it for lengthy flashbacks of linear memory.  The science fiction setting seemed unnecessary to relate the tale of Vita and the love she left behind.  In fact, it was hard to tell which of the two concurrent stories was less necessary.  Is this a tale of lost love interrupted by science fiction, or science fiction interrupted by a tale of lost love?  Either way, Vita goes a long way to have a very mundane epiphany.  The writing also left me a bit cold because it was chock-a-block full of similes.  I like a good simile, but when they’re overused I feel like I’m being hit between the eyes with a hammer.  I feel like I’m still ringing from the blows.  Like a bell.  There are three in the first paragraph, so perhaps, charitably, this sensitized me to it a bit.

So, all in all, a couple of pretty average stories, and one that shone like a star next to them.