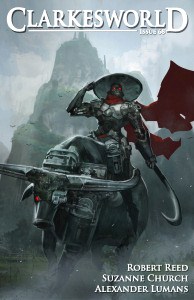 “Prayer” by Robert Reed
“Synch Me, Kiss Me, Drop” by Suzanne Church
“All the Things the Moon is Not” by Alexander Lumans

I must say that this was a particularly dystopic issue of Clarkesworld. I found it too much of a downer but there are always interesting ideas in SF and these three stories do have that.

The first is arguably the best and is “Prayer” by the prolific Robert Reed. “Prayer” takes place in a future Canada overtaken by a “Christian” USA that believes the internet is their actual God, and who answers their prayers. There are two narrators -– a 14 year old Canadian girl who works for the Canadian underground and then her AI Gun who tells us what is happening from its viewpoint. The two characters are well drawn and the story moves briskly as it tells of an attempt to assassinate an American politician. The ideas and the setting are extremely well handled, but for some reason it didn’t cohere for me as a story. Unfortunately, I find this is the problem I have with most stories by Reed –- excellent imagination and writing but with something missing. His work (for me) is rarely remembered and treasured. Admired, yes, but treasured, no. If you love Reed this is another must read for you.

“Synch Me, Kiss Me, Drop” is an interesting tale by a writer I am not familiar with – Suzanne Church. It’s a gritty near future drug story. Music has become a drug and there are clubs to get high on individual hits of song. This is a great idea but unfortunately it doesn’t go very far, for the narrator is such a pathetic loser that I didn’t want to spend time reading about him. The idea and the future “club”  is of interest but the rest is much the same old drug story. Ms. Church writes well, but not so well (as of yet) to invigorate this story.

I wrote in my notes after reading “All the Things the Moon is Not” by Alexander Lumans that it was a stifling piece of writing. Much like the two before, it was atmospheric but unpleasant. Reed, due to his craft, can make that work but, again, this was a story that I had to fight my way though. The story takes place on the moon in which underground water has been discovered and a mining team has been brought in. They discover that the water is mixed in with a “mold” that they must first separate from the water. Fortunately, the spore has found uses on Earth and so is a profitable enough venture to keep them working and in business for a year. They have 28 days left as the story opens, and in the previous 11 months the astronauts have discovered that the mold is also a great drug. As well, close familiarity has bred contempt, and they all hate each other. So we have 4 astronauts going crazy and drugging out until the new team arrives. I found it a stifling story with a stifling setting with unlikable characters.

I must say that this is not my favorite issue of Clarkesworld.