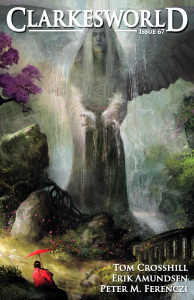 Rico is a creator of computer simulations, dealing with his old and dying mother and thinking about keeping her alive despite her dislike for the technology.  “Fragmentation, or Ten Thousand Goodbyes” deals with this dilemma, which is complicated by Lisa, his lover, who thinks it’s the greatest thing around.  Tom Crosshill develops the theme wonderfully, bringing up aspects of life and memory that gives it some terrific depth and emotion.

I will say that “Draftyhouse” by Erik Amunsen left me cold.  The title place is located on the moon, home to Shenroos.  From what I can gather, the moon is abandoned and had been colonized by “bridgeways,” which seem to be a type of wormhole, though it’s not very clear.  Shenroos seems to be the last one alive.  I found it extremely hard to figure out what was going on.  Too much is mysterious and there isn’t enough to grab hold of to figure out what the story is supposed to be saying.  It’s unclear as to what is meant to be taken literally, and what is hallucination or dream or some other thing.  There are plenty of ideas and poetic writing, but leads nowhere and says next to nothing, and the character of Shenroos is pretty much a composite of random traits that make him extremely uninteresting.

Peter M. Ferenczi‘s “The Womb Factory,” on the other hand, succeeds brilliantly by being a good story well told.  It’s about Mei, who’s pregnant, but not with a human baby, but as a way to manufacture a half-alive, half-computer toy.  The story is about Mei’s attempts to escape her situation, along with a nicely detailed look at the women in the factory, who are treated as living machines.  What is especially impressive is that Ferenczi seems to be heading for a particular conclusion, but doesn’t let Mei off that easily.  She’s a very appealing character who you can’t help rooting for.