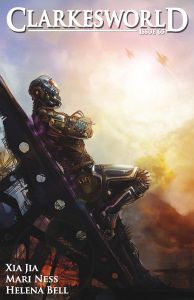 “And the Hollow Space Inside” by Mari Ness deals with the ethics and the human cost of cyber-engineering humans.

With Earth facing disaster because of unsustainable resource use due to overpopulation, plans are being made for off-planet colonies. When Doug and Crystal’s unborn daughter is found to have no brain, guaranteeing that she won’t survive, the couple are offered the option of having the fetus wired with CPUs and implants that will turn her into a functional cyborg, or ‘implant’. The parents agree; but the resulting child, Amy, is both more and less than human.

The legal status of ‘implants’ is far from clear, and the child becomes the de facto property of ‘the facility’. Once fully grown and programmed with the equivalent of multiple doctorates, Amy is selected to be one of a team of eight implants which the facility will send to Mars to establish the possible effects of prolonged exposure to Mars’ reduced gravity and terraformed environment on human physiology before ‘real’ people are sent there.

But when, years later, the ‘implants’ return to Earth, it turns out that system and patch transmission errors have damaged them further still. Further complications and trials ensue.

The core of this story concerns Crystal’s inability to come to terms with her daughter’s distressing nature.  Although I found this a grim and unrelentingly depressing story, structured in a way that made it slightly difficult to follow, Ms. Ness hits the mark she’s aiming for. Her writing is visceral and assured, and I’m sure we’ll be seeing far more of her in years to come.

Next up is Xia Jia’s “A Hundred Ghosts Parade Tonight,” translated by SF author Ken Liu.

The story takes place on Ghost Street, a theme environment populated by the souls of dead humans sealed in machine bodies. Once a popular tourist destination, Ghost Street has lost its appeal, eclipsed by newer attractions.

Ning, a young boy, is the only living being on Ghost Street. When, one cold, moonlit night, he overhears his surrogate parents, the beautiful ghost Xiao Qian and her warrior companion, the ghost Yan Chixia, discussing Ning’s own nature amid their own dreams of escape, Ning begins to question his own origins and the very reason for his existence.

A complex, multi-layered tale, “A Hundred Ghosts Parade Tonight” is also a convincing, wistful metaphor for China’s current dizzying transformation. In a fine translation that preserves the nape-chilling language and imagery of the true poet, Xia Jia serves up a resonant and unique tale that hits some of the same notes as Robert Silverberg’s classic, “Sailing to Byzantium.” Don’t miss this one.

Does Riverside High School in Iowa ring any bells? Helena Bell’s “All the Young Kirks and Their Good Intentions” concerns that very school’s class of Kirks in the year 2249.

Another dystopian piece set on yet another poisoned and dying Earth. Every year a couple chosen from the school’s current class of Kirks—kids born on March 22nd and all with names like ‘T, or Tiberius/Tiberia, James/Jamie—is sent to the lunar colony. But the hopeful young Kirks are doomed to succumb to the same fatal infections that are killing everyone else; and since the lunar colonists, with the single exception of young James (aka Fisher) Kirk, are themselves developing illnesses presumably imported from poisoned Earth, the annual delivery of New Kirks seems to have become a hopeless ritual.

Ms. Bell’s inarguably good craft and well-aimed ironies notwithstanding, this is the kind of story that reinforces my conviction that current Anglophone SF is as stuck as NASA’s Spirit Rover. With the unbounded possibilities that SF offers a writer, why do we see these same dystopias revisited ad nauseum? Do SF readers really enjoy them, or is everyone else as climb-the-walls tired of them as I am, but just too depressed to say anything?