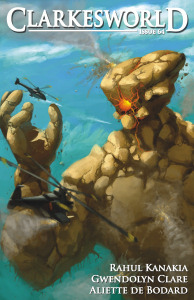 Clarkesworld continues to be one of the best venues for short SF. We have three interesting and clever pieces in this issue.

First up, a new story by Aliette De Bodard, who has become a favorite of mine in the past two years. She does not dissatisfy with “Scattered Along the River of Heaven.” We first meet a woman and poet named Xu Anshi who is held in prison by the San Tay. In prison she meets another prisoner named Zhiyeng. Anshi plans a very unusual escape for her and Zhiyeng.

We then come into the present (the storyline present, that is – it is still very far advanced from our age, as all this takes place on another planet and its orbiting space station) to meet Wen, who is arriving for her grandmother’s  funeral.

Much more would reveal spoilers, but we follow these two paths to their inevitable conclusions: of regret, pain and lost hope. It follows the politics of these worlds as well as the beautifully characterized people involved. This is a poignant story of families and politics, elegantly unraveled. Delicious!

The second story is not on par with the first but is nevertheless very good in its own right. “What Everyone Remembers” by Rahul Kanakia is very clever. Clever in ways I did not at first understand.

The story itself is told from the perspective of a sentient insect-like creature created to be the mother of the next generation on a post-apocalyptic Earth. The creature lives on a boat with Maman (her creator) and Uncle Frederick. The fiction turns on the various ways these two humans think this creature should be raised. Even though the creature’s viewpoint is rather limited we come to see the humans involved clearly and the predicament explained well.

Now to the ending. It finished rather abruptly for me. It felt like half a story with the ending unwritten. The clue, I feel, is to re-read the title when you’ve finished with the story. It is a finished story and a clever one to boot.

It is always interesting to see an SF story through the eyes  of an alien protagonist, and Gwendolyn Clare handles that with aplomb in “All the Painful Stars.” The alien here is a member of the “Sheekah” species. She is a fighter/pilot/cop stationed at the edges of a star group controlled by the Sheekah. Into this empire blunder two alien societies at war with one another. She, as the cop in the situation, tries to diffuse the fight but in the process is wounded and finds herself on one of the alien vessels. The ship was built by the “Brights” but crewed by humans. It is the interaction of these two alien species working to understand a ship that neither side understands that forms the core of the story. It reminds one of “Who Goes There?” by John Campbell but is told in a gentler, more sensitive voice. The prose is controlled but supple, yet always a bit skewed coming, as it does, from the alien perspective.

Gwendolyn Clare, I’ll have to remember that name. She is definitely a new writer to watch.

The January 2012 issue of Clarkesworld contains one award worthy story and two very good pieces by relative newcomers. If future 2012 issues prove to be this good, this may be the SF magazine to beat this year.