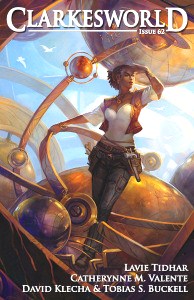 Mai is a Vietnamese soldier, a sergeant in the Marine,Police.  In “A Militant Peace” Mai is part of an internationally sponsored military unit which is invading North Korea, but the mission is not a conventional one, at least in a military sense.  Once their base is established and its Defence perimeter they receive surrendering North Korean soldiers and civilians.  The main attraction for these North Koreans is sanctuary but also food and clothing according to western standards.  Their base is appropriately named Camp Nike.

Mai and her comrades are allowed to defend the camp, but not to harm any of the attackers.  Their high tech equipment should allow them to control any situation involving the North Koreans but no one has attempted this kind of assignment before.  World opinion is important and there’s a constant media presence to deal with.

David Klecha and Tobias S. Buckell pay as much attention to the socioeconomic and political factors as they do to the technology, but the real question is will these soldiers be able to adapt to their new situation?  This is a good story.

Israel is all about real estate, the past, and what the past has given to the present.  Boris is an Israeli of mixed race and the product of several generations in the holy land.  For him, family goes beyond shared lineage but into shared memory thanks to the efforts of his grandfather.  These memories are more than just nominally shared facts, but include sensory, visual, and olfactory information.  This offers almost anyone, regardless of race or religion, a chance at a form of immortality.  Lavie Tidhar has created a story which spans several generations but never really leaves the present day character — Boris.

“The Smell of Orange Groves” is about memory almost as a commodity.  Boris can remember things distinctly which he’s never actually experienced and thus have a view, a perception of the city over time that few people can have.  His link to an ongoing feed allows him to do this and when it’s compromised Boris’ entire world is threatened.

The technology or means of doing this are regarded as positive for the most part, but Tidhar has introduced a couple of serpents into this garden of Eden.  It’s a good story well told.

“Silently and Very Fast (Part Two)” does something that I don’t normally like – it  throws information at the reader relentlessly, but on the other hand, ironically, that’s what the story’s about.  It’s about human-computer interface but from the angle that it becomes another means of social media, role playing etc. Along the way the reader becomes more involved with the games being played instead of how things are happening or why.

As in “The Smell of Orange Groves” there is an information feed but in this story Catherynne M. Valente doesn’t introduce any likelihood that it may be cut.  Perhaps that’s in the last installment.  This is still not my cup of tea, but I have to admit that parts of it are clever.