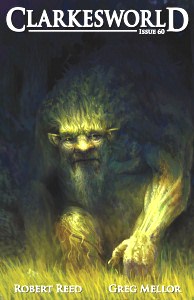 “Pack” by Robert Reed
“Signals in the Deep” by Greg Mellor

Robert Reed’s post-apocalyptic allegory “Pack” is a sharp tale, deftly casting stones at the fragile skein of human civilization to see what Darwinian savagery lies beneath. Its scenario is lightly sketched and barely described, though what sparse details we get are enough to evoke an atmospheric impression of the desolate, fallen world our narrator lives in. The narrator, likewise, has enough specific traits for the needs of the story and its subtext; no more, no less. Living all alone in his “castle,” with his “tech” to protect him, he responds to the appearance of a “dog” on his lawn with shell-shocked placidity, eventually taking the creature and his variable pack and friends in.

The dogs roaming the poorly populated hinterlands beyond the castle (which the narrator never leaves; we get the impression what humans are left in this world are all isolated in their little castles), we come to understand, are not dogs as we know them. They behave somewhat like dogs or other pack animals, but they talk and goad, threaten and manipulate, use tech and armor and weapons. They might even be a certain breed of human survivor, or mutants—it doesn’t matter. What does matter is the interplay between the human narrator and the dog that he becomes “Master” of; a sinister and fascinating give-and-take that ultimately begins to blur the lines between the division of human and animal beyond the narrator’s castle walls.

It’s an unsettling story, and while it doesn’t have the power of emotional investment or any richness of detail or character, it delivers enough of a dark, satiric punch to be a worthwhile read.

To balance out the coffee-black darkness brewed by Reed’s piece is Greg Mellor’s “Signals in the Deep,” which, despite an ominous title, is a shot of sfnal optimism. The story, about a mother who crosses the solar system in search of her son, is both sweet and infused with a classical sense of wonder. As the previously Earth-bound woman acts as our proxy on a tour of the wonders of colonized space, we appreciate the sights as well, from “elevators like needles along the curvature of the world” to the “methane ice wastes of Charon.” The world (solar system, rather) feels plausible, convincing.

There’s nothing stunningly new or original here, nor is the character drama acutely observed or very moving. The relationship between the mother and the son is introduced to us in exposition (which starts the story, no less; a mistake) and then never really delved into too deeply—the arc of their interaction feels rote and predictable, despite the sincerely conveyed wonder of the circumstances. The centerpiece remains the journey itself, which is well illustrated by Mellor’s clear and unpretentious prose. A monumental discovery that forms part of the plot seems somewhat shoehorned into the human drama, becoming merely a plot-point to develop the central relationship. Still, despite an entirely unnecessary infodump of feelings towards the end to neatly sum up what the protagonist has learned, I liked the last line of the story. It earns a genuine moment of pathos that lends real meaning to the mother’s long journey.