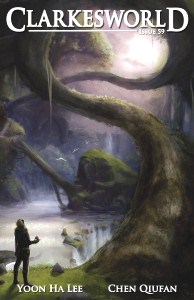 Yoon Ha Lee mixes far-future science, mankind reaching for the far stars along with the innate need to carry its gods with it, and a clone-sister traversing a strange underworld in a poetic retelling of ancient Mediterranean (I think) creation/death myths. Unless one is familiar with these myths (or myth, singular) the thrust of the story will be hard to appreciate, indeed might seem frustratingly confusing, but the author’s knack for beautiful and evocative description should carry the day. In a limited sense, the author seems to be scratching around what Roger Zelazny ably explored with his 1967 Hugo winning novel Lord of Light (i.e. wondering how ancient gods and their attendant myths might translate into the far future, with the fantasy aspect couched in science)–though in an altogether different fashion and to different ends. “Conservation of Shadows” is told in second person, which again might lead to confusion on the part of the reader unfamiliar with the myth Lee is reconstructing (as was I), but the carefully dropped in scientific elements (“clone-sisters” for one)  provided a familiar protocol that kept my interest piqued in hopes of discovering just where the story was headed, which Lee herself provides near story’s close in an inoffensive and welcomed bit of info dump. Lee’s work (much of it more straightforward SF) is always well-written and interesting, so those up on their mythologies will undoubtedly reap the full benefits of this otherwise well-wrought departure from the author’s usual fare.

Chen Qiufan’s “The Fish of Lijiang” was originally published in China’s largest SF magazine, Science Fiction World, in its May 2006 issue. This is its first English language publication and was translated by Ken Liu.

I liked this story. Set in a future China replete with high-tech gizmos ala some of Bruce Sterling’s short work from several decades past (“Deep Eddy,” “Bicycle Repairman,” etc.), Chen’s China portrays the ever-widening gap between rich and poor, laborers and the idle rich, with both first- and third-world lines of demarcation suffusing the lives of the populace. And at the center of it all is a scientific “invention,” if you will, that reinforces these social and political lines of demarcation.

We find the protagonist forced to leave his office job to take time off in a rehabilitation center though he is one of the best, most productive employees in his company. He is told he needs to unwind and lessen the stress, though he disagrees. While there he meets a lovely young woman who is there for the same reason–or so he assumes. Piece by piece we discover that the woman, who is drawn to our man, is there for the opposite reason–to reset her internal clock to one of normalcy from her own mysterious job, which makes time run more slowly for her. Her job? An attendant at a special place reserved for those able to afford an experimental procedure whereby time is dilated for them; company elderly CEO’s and other movers and shakers who do not wish to relinquish their legal rights so quickly–their minds aging much more slowly than their aged bodies due to this new procedure. But the procedure is tricky and some of the neuropsychological side effects “leak” into those caring for the needs of their wards as they repose in a death-like sleep. So as our woman’s time has become gradually dilated our man’s has become compressed, for little did he know that his office had been “bugged” with a device insuring that he will work faster and faster, his dedication to work never-flagging.

So both now end up in a rehab center where their secrets are revealed.  Along the way, Chen skillfully drops in bits of telling characterization that adds personal depth to the story–they are not arbitrary, which shows he knows what he is doing, wasting not a word. Social and political observation add another layer so that we see not only the man’s plight on a micro-level, but a larger picture of the way Chen’s future China may become for its people. And it’s not pretty. The old boss is the same as the new boss, but on a much more devious level. Kudos to Chen for the imaginative core concept and storytelling skill, and to Liu for bringing both alive in translation.