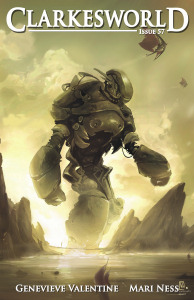 In “Semiramis” by Genevieve Valentine, our hero lives in a world where global warming has raised water levels, and cities are being swallowed. She works in the Svalbard Seed Vault, but what she wants is to smuggle out seeds. She recruits Lisa for the job, and then works to get the product past the Peacekeepers.

There are some stories that draw me right in, and some that take a bit of work.  This was in the second category, further hampered by a lack of credible motive.  Still, it’s a decent tale. It ends by saying, “Inevitably, eventually, you start to care.” The problem is, I didn’t.

“Trickster” by Mari Ness tells us of a visit in the night of a god. He has come to ask her to kill another of his kind. The one he has in mind, the God of Silver, killed her infant son and has left her in a wheelchair. When she’s sent to one of their two moons to do the job, she finds one truth; they are tricksters.

This was prettily written, but I found it disjointed, and again, I just wasn’t drawn in.  It felt like work to get through it.

If you like to dig through and puzzle over stories, trying to figure out what’s happening, this issue may appeal. My personal favorites are those that either make me care, or have something interesting to say. Neither of these is in that category for me, but they’re both of good quality.