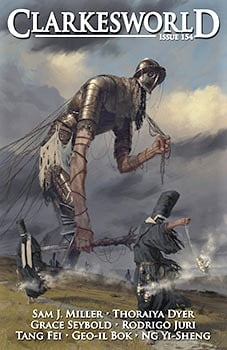 “The Visible Frontier” by Grace Seybold

“Xingzhou” by Ng Yi-Sheng
“Shattered Sidewalks of the Human Heart” by Sam J. Miller
“Wu Ding’s Journey to the West” by Tang Fei
“Flowers on My Face” by Geo-Il Bok
“One in a Million” by Rodrigo Juri
“The Weapons of Wonderland” by Thoraiya Dyer

The July issue of Clarkesworld #154 contains four original short stories and three translations into English. Therefore all seven have been reviewed.

The lead piece of original fiction is “The Visible Frontier” by Grace Seybold. The time is a far distant future. There are many clues that this does not take place upon the planet Earth, but the actual location emerges slowly and naturally as an integral part of the story.

The protagonist, Inlesh, has joined the crew of a sailing ship, driven by a desire to explore his diverse and mysterious world. The earlier part of his maiden voyage lives entirely up to his expectations until his encounter with one of the races of machine people—sentient robots. That alien takes our protagonist at his word and shows him the reality of his home. It is a reality so shocking to the naïve young Inlesh that the very memory of it must be deleted from his mind to preserve his sanity. He becomes just another sailor of a single ocean, content with the small pleasures of exotic food and natives upon its shores, artificially constrained from any further wondering about his world’s greater mysteries.

Many SF readers will enjoy the gradual discovery of Inlesh’s location, but the story has a rather depressing final message. Optimists say: “Knowledge can only make us stronger.” Pessimists will insist: “There are some things that we are not meant to know.” The author’s message seems to be the latter.

The second original offering is “Xingzhou,” written in English by Ng Yi-Sheng. This young author has created a fascinating and fantastical universe that encompasses energy beings from the earliest days of the big-bang, an Indian demon, a sentient fungus and a human rickshaw coolie—and that is just to name the narrator’s grandparents!

This unusual story tells of the far-from-everyday lives of two of those grandparents against the backdrop of Xangzhou, a celestial city built of exotic matter. The ancient Chinese curse: “May you live in interesting times” certainly applies to these two as Xangzhou is first conquered by flesh-eating aliens, only liberated at great expense by the blood, ichor and energy discharges of its diverse inhabitants and then forced to fight the re-imposition of rule by the Empire that had held it in stagnation for centuries. Lastly, the entire city flees the Empire. The celestial city of Xangzhou finally comes to rest upon an alternative early 20th century Earth, morphing from its exotic form to become a trading city situated between the Indian and Pacific Oceans (rather reminiscent of the author’s home of Singapore).

The third tale is “Shattered Sidewalks of the Human Heart” by Sam J. Miller. This is an alternative history set in New York in 1939 in the days leading up to the start of the second world-war. The premise of the story is that the movie King Kong was a documentary rather than fiction. The giant ape had been brought to that alternative New York, had climbed the Empire State Building and had died in reality.

Most alternative histories explore the changes caused to the world as we know it by some pivotal event having a different outcome. This is a much smaller scaled affair. The narrator is a New York taxi driver and the whole story takes place in or around his cab on the single afternoon in which Germany invaded Poland. The narrator is one of many individuals who saw and were affected by Kong’s fall but New York City and the rest of the world have clearly absorbed the experience and have moved on almost unchanged. The writing and the characterisation is competent, but many readers may fail to grasp the purpose of this story or its real message, if any such is intended.

“Wu Ding’s Journey to the West” by Tang Fei is translated from the original Chinese by Andy Dudak. This story is set in an alternative reality that is roughly technologically equivalent to early 20th Century Earth except for one massively distorting effect. The Second Law of Thermodynamics is reversed so that the chaos or entropy of a closed system can only decrease and matter develops irreversibly from a chaotic state to an ordered one. The author explores this wildly implausible hypothesis with a cheerful absence of any scientific rigour and the resulting inconsistencies may disconcert any reader who understands what would actually result from the reversal of this law. If the reader can put aside reality and treat this as a light-hearted piece of entirely unscientific fantasy then it explores the journey of Wu Ding and his assistant from Beijing to St. Petersburg and the attempts of three generations of his descendants to create a road between the two cities. This story also grants a fascinating insight into the automatic acceptance of corruption on the part of officials, familial duty and the importance of face in any iteration of China across all the multiverse.

“Flowers in My Face” by Geo-Il Bok has been sympathetically translated from the original Korean by Elisa Sinn and Justin Howe. It is set in an all-robot society on Ganymede about 1000 years into the future. All of the human colonists of Ganymede have been dead for thirty years as the result of a natural disaster. This is a warm and gentle story that describes the robot society that has developed over the thirty years since the disaster through the eyes of the first person protagonist, a newly revived robot named Jimmy Chan. The robots of Ganymede are attempting to cope with the loss of their original purpose by rebuilding their world in tribute to their lost human colleagues. In that process, they have built a society that is a strangely skewed copy of a utopia that humanity might have had as an ideal but had never achieved in reality.

“One in a Million” by Rodrigo Juri was originally published in Spanish about 10 years ago. It is set in a future that could possibly be only decades away. It contemplates the takeover of the Earth by a consortium of human-manufactured artificial intelligences. The narrator is a human doctor and the story moves cleverly, if somewhat disconcertingly, between the narrator’s teenage years just before the takeover and his subsequent life as a member of the resistance to the AI takeover. The narrator’s experience with an early-model AI robot is central to the entire plot and has a significant influence in driving him to join the resistance against the machines. However, it is not only he who is influenced by that experience. It also has a seminal effect on that AI robot and on all the AI iterations that follow.

In this provocatively written piece, it is the AIs who are not only composed and logical but also benign and merciful. The human resistance begins with good motives and high ideals, but degenerates into a vicious and self-destructive clique. The reader may not immediately be comfortable with this stark view of human foibles but the examples of Nazi Germany, the genocide perpetrated by Hutu extremists in Rwanda and the excesses of Pol Pot in Cambodia show that it is not inconceivable. However, this piece is not all doom and gloom. There is a final twist at the end that converts tragedy into a sort of triumph.

The last original offering is “The Weapons of Wonderland” by Thoraiya Dyer. The date is 2066. The location is our solar system. Earth is in serious ecological trouble with a carbon sequestration plague well upon the way to freezing the oceans and ending all life. A few rich people have taken to hibernation vaults or sent their genetic material into space but most plant and animal life is doomed.

Wonderland is a large cometary body currently at its once every two-thousand year perihelion approach, only 3AU from the sun. The first expedition to Wonderland revealed that the main body of the comet was hollow and contained exotic alien life. The following manned expedition discovered that these lifeforms were so highly adaptable that they could fuse with humans to produce hybrid creatures with both alien and human characteristics.

Two talented women, grandmother and mother to the protagonist, have two very different solutions to the Earth’s problem. They vie to persuade their descendant that their way is the right way. In essence, one wishes to save as much as possible of the Earth as it once had been with a high tech version of Noah’s Ark. The second plans to use the creatures of Wonderland to restore the Earth’s ecology, knowing that that would irrevocably alter the species who rule it. Their descendent can only help one and may choose to help neither. The author cleverly leaves that decision open so that each reader can make up their own mind on the best action, if any.