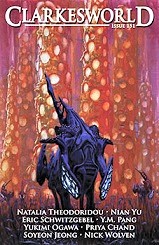 “The Last Eagle” by Natalia Theodoridou

“Ripen” by Yukimi Ogawa
“Gaze of Robot, Gaze of Bird” by Eric Schwitzgebel
“The Flowering” by Soyeon Jeong (translated by Jihyun Park and Gord Sellar)
“Social Darwinism” by Priya Chand
“In Search of Your Memories” by Nian Yu (translated by Andy Dudak)
“Skyscrapers in the Sand” by Y. M. Pang

This 151st issue of Clarkesworld contains eight stories, one of which is a reprint (and not reviewed), two others are translations of stories, and another is a novelette.

“The Last Eagle” by Natalia Theodoridou

This SF short is set in a future recovering from a world-wide war that has devastated the population. A weak boy, Fabiano, is searching for a replicant named Beatrice, the only friend he had. She had left to find the last eagle.

A worldly man, Joâo, comes to help Fabiano; and together they search through the mountainous region where the villages have lost most of their people to the war. In time, the two searchers become lovers as they each struggle with their memories of surviving the war.

This was a thought-provoking study in characters dealing with a very changed world and written in an easy flowing style.

On an island that relies on tourism, the people with skin color rule over the colorless majority in this puzzling SF novelette. When an enamel-colored woman develops cracks, she reaches out to a colorless craftsperson for a natural solution to hide the cracks.

Banned from using cosmetics, the craftsperson, Kiriko, and her mentor develop innovative, and potentially illegal, overlays to cover the cracks. But when the enamel woman takes a bath with a foreign tourist, she develops a strange illness that attracts the attention of the authorities. Under investigation for their practice, can the craftpersons find a way to cure the enamel-colored woman?

This story was confusing at first and slow throughout.

“Gaze of Robot, Gaze of Bird” by Eric Schwitzgebel

Jll-L is a terra-forming robot sent to find a potential planet in this SF short. After ninety-five thousand years it finds a potential home and begins its mission. Though Jll-L’s home planet is gone, it continues to send updates back. In one of its compartments is a stuffed toy monkey, and Jll-L loves its monkey.

Over millions of years, Jll-L coaxes life, ever more complex, to develop on the planet, striving to create an animal in the image of the stuffed monkey. Jll-L has one other wish, a more personal one, it wants to become conscious.

This story introduced new ideas, though the story was a little too repetitive in the middle. The author delivered a nice ending.

Jeong’s science fiction short is set in a future South Korea where the government watches everyone closely. One sister plots to rebel against the controls while her younger sister prefers a normal life away from government scrutiny.

Soon, the elder sister is caught and jailed, but manages to send her sister a package of seeds. Should the younger sister sow these seeds, as she is sure her sister wouldn’t send her normal seeds.

It can be a fine line between a story being mysterious or confusing. This story was slow and more of the latter.

A biologically altered woman, Ishtar, craves attention in this short science fiction story. At birth, Ishtar’s mother modified her genome to enhance the need for adoration and set in motion unforeseeable consequences.

The story explored a different aspect of biological manipulation and the associated consequences. The prose was slow and at times hard to follow.

This SF short is set in a future where people can upload their memories. Liang Sheng has gaps in his uploaded recollection, gaps that are leaving him with the feeling of being incomplete.

When a memory administrator begins researching Sheng’s fragmented memories, he finds many disturbing facts in what should have been a benign life, including evidence of schizophrenia. The administrator digs ever deeper and finally breaks away from the stored memories to explore historical records. Finally, he finds the truth behind Sheng’s past, but does he dare to let Sheng know what he found?

This story explored another aspect of saving a person’s memory, but it did it without providing enough sense of need to make the story interesting.

“Skyscrapers in the Sand” by Y. M. Pang

Pang’s science fiction short is about Xuming and a future where the city of Shanghai is buried under three hundred meters of windblown sand. Xuming’s mother came from the old city before it was lost, now humanity lives in domes to protect them and what’s left of plant life. Xuming misses her lover Yanik and wants to do one last thing for him.

Xuming is travelling back to Shanghai to find the top of the Oriental Pearl Tower, carrying a recording of Yanik’s song “Skyscrapers in the Sand.” She trudges over the soft sand, looking for the spire at the top of the skyscraper. She is old now and unsure if she can complete this last mission for Yaniv.

This engaging and poignant story gave a brief glimpse into a climatically ravaged Earth. It was a nice snippet of a story.