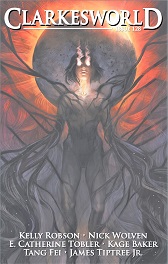 “Streams and Mountains” by Nick Wolven
“We Who Live in the Heart” by Kelly Robson
“Baroness” by E. Catherine Tobler
“The Person Who Saw Cetus” by Tang Fei and Translated by S. Qiouyi Lu

Deep in the Cascade Mountains a mystery must be unraveled in “Streams and Mountains” by Nick Wolven. Mary, former OB/GYN, and Malia, law prodigy, sent from D.C. are tasked by the Executive Bioethics Agency to work with Paul, local biologist and Ken, a forest ranger. Here they must investigate, record and conclude if a sasquatch sighting happened and determine the state of their condition. We understand there is something serious at stake here. Emotions are running high, except for maybe Paul, the young biologist, who is just energized by the moment. The real downer of the group is Ken who feels nothing but disgust for everyone, especially the sasquatch. It turns out these sasquatches used to be people who have been devolved. Regardless, how silly it seems at this point, the investigation continues. Beyond the absurdity of why anyone would choose this type of life, we slowly get the facts of who these subjects were and speculation begins with each member of the team. Things are even more complicated when we find out that the female sasquatch is with child. The team argues, causing delays, which in the end is invariably up to Mary to decide how they will proceed. It isn’t long before the answer presents itself. The team, sasquatches and the environment release a breath and get to work like a well tuned microcosm to accomplish a miracle that is both surreal and life changing.

In “We Who Live in the Heart” by Kelly Robson, Ricci—creche born at genuis level—is the newest arrival on a helium rich world, where humans have converted giant whales into floating habitats. Doc, easily the leader of the group, is elected to smooth the transition after their artist Vula’s last few attempts failed. Ricci apparently is a natural. Like a breath of fresh air, Ricci’s enthusiasm and curiosity about all the systems in and out of the whale help thaw the groups one-off dynamic. Ricci’s mysterious friend Jane, we learn later, is her therapist, is worried about her overworked, overachieving client turned friend and starts her own hunt for the truth. Despite Doc’s spying on Ricci’s discussions with Jane (normal behavior) individual group projects (chess, sculptures, and research) and basic administrative tasks keeping their whale functioning, Ricci and Jane slowly unravel the founding and development of the system now in place. Once Doc’s enigmatic past is uncovered, Ricci embraces the embers that the Doc has left behind as failures or differences in opinions. Goodness knows Ricci has had her share of mental challenges. Regardless of Doc’s frosty behavior, Ricci can’t stop her desire to learn more and discovers a chain reaction that threatens their world. Amidst growing evidence around them, Ricci, Jane, Vula, Chara, Eleanor, Eddy, Bouche and Treasure find a common purpose that even Doc can’t ignore. Follow them as they save themselves and their world!

Bishop and her crew are in search of their missing miner Jones on the moon Titan. Effortlessly, they work and joke together like a well oiled unit to Kraken Mare trench, where they find Jones’s submersible Three. The details on how or why they became Trophs, their bodies modified to handle the methane laced atmosphere, is not clear. However, Bishop and supposedly the rest of the crew have been prepared psychologically for living on such an inhospitable world. Due to the conditioning (repeatedly revisited and referred to as the Tank by Bishop), they hardly blink at what they find on the mysterious ship that has trapped Three. Which is nothing. As they search the UFO, Bishop senses something strange. It takes not just her conditioning, but also several life experiences that aids her ability to shake off the presence, still alive and desperately waiting within the immobile vessel. The crew completely clueless as to what is going on, finally find their missing miner, but are already too late to stop the mental takeover of Bishop. As her strange behavior becomes more noticeable and the crew becomes more desperate to leave, Bishop must find a way to understand the situation or they are all in trouble. “Baroness” by E. Catherine Tobler gives us a haunting vision of how Bishop uses all her mental acuity to stay strong against an unknown entity. Whether her choices end up saving anyone, but herself, is left up to speculation.

“The Person Who Saw Cetus” by Tang Fei and translated by S. Qiouyi Lu weaves the reader through an on/off again father/daughter relationship. Because it plays out through Lillian’s eyes, it has a meandering, mystery type vibe. Lillian’s father is a struggling artist who is a socially graceless introvert even when talking to his daughter. Dedicated to his work, he spends months away from home only to return with bizarre stories. Most of his interactions with people tend to blow up in an argument, like a conversation with Lillian’s teacher. Lillian doesn’t seem embarrassed by his behavior. She just sort of accepts it. She carries on with life even after her father disappears. Vicariously, Lillian forms and breaks attachments as swiftly as her father drifted in and out or her young life. Nothing really sticks, except the idea that her father’s death could be just an act. In this small way, we know she truly loves her father. It is actually the first time we get any type of emotion from Lillian, albeit via an amused reminiscence. Her reluctant meeting with her father’s agent brings Lillian’s final memories and circumstances behind her father’s death into perspective; when the agent presents her with a stereoscope. The stereoscope created that summer for Lillian’s homework contains the truth. The truth is strange and tragic. Also, don’t let the title fool you, Cetus plays a role (if only a passive construction) to understand the tie that binds a father and daughter’s relationship in the end.