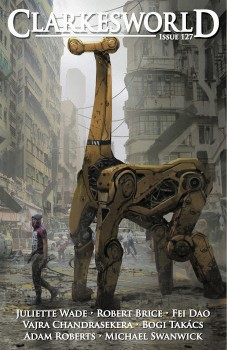 “Conglomerate” by Robert Brice
“Some Remarks on the Reproductive Strategy of the Common Octopus” by Bogi Takács
“Left of Bang: Preemptive Self-Actualization for Autonomous Systems” by Vajra Chandrasekera
“Sunwake, in the Lands of Teeth” by Juliette Wade
“The Robot Who Liked to Tell Tall Tales” by Fei Dao

This issue of Clarkesworld is not as exciting as last month but does have stories that are well worth reading.

Robert Brice makes an impressive first professional sale with “Conglomerate.” A spaceship hurtling away from Earth contains the whole simulated world inside it. The crew of the ship consists of thirteen people forming a conglomerate mind but can become individualized at will. One of these individuals, at the beginning of the story, is having an existential crisis that the others find frustrating. What they do about him and how they deal with the new planet they intend to colonize is full of some interesting twists and turns. Mr. Brice has a very good eye for visuals and grand ideas. This is not a character piece, as such, but the final decision is based on a character’s decision so I wish he, at least, could have been deeper and more complicated, but this is a very impressive debut. I hope Mr. Brice continues to write and will continue to astound us.

A story narrated by a snarky octopus does not come around all that often and that is one reason I was drawn to “Some Remarks on the Reproductive Strategy of the Common Octopus” by Bogi Takács. It is a tale of future Earth that was abandoned by humans when the pollution of the planet became overwhelming. It is told by a lowly octopus who just knows fables of their past until he/she encounters a human left behind. We are taken along on a fun ride revealing the true history and discover why the octopus has reasons to be snarky.

“Left of Bang: Preemptive Self-Actualization for Autonomous Systems” by Vajra Chandrasekera is a short-short that almost has a longer name than its contents. The story is capably told about how a robot is designed to stop assassinations but soon is doing the assassinations itself. It is bleak and brings in the interesting use of human hands attached as the robot’s hands in order to control the being. Not a poor story but just not very memorable.

Juliette Wade has written a well thought out 1950’s style story of humans surviving on an alien world with its sentient, animal-like indigenous people. Unfortunately, “Sunwake, in the Lands of Teeth” did not convince me and seemed too long at the same time. I felt, as I have in the past, that this is part of a series and so much back story was crammed in without any of the emotion that it all seemed very set-up to me. Perhaps beginning SF readers would be attracted to this basic story. It is as well done as many other of these types of stories written in the past, but not good enough to raise above more classic stories dealing with this situation.

This next is a long fairy tale and my favorite of the bunch. Called “The Robot Who Liked to Tell Tall Tales,” it is by Chinese author Fei Dao. Translated by Ken Lui, it remains literate and enticing in English. An aged king who is known for his honesty must give the kingdom over to his only son who is an inveterate liar. Or at least a brilliant story-teller. The son, now king, creates a robot to find even more extravagant stories to tell so that he will not be remembered as the world’s greatest liar. We follow this robot though his meetings with death and those who cheat death. It is exactly what the title says that it is. A tall tale. And wonderfully told.

Not a stellar issue of Clarkesworld, but there is something enjoyable here for all.