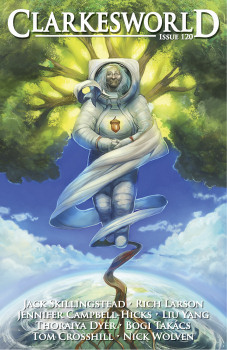 “The Despoilers” by Jack Skillingstead

“Aphrodite’s Blood, Decanted” by Jennifer Campbell-Hicks
“The Green Man Cometh” by Rich Larson
“The Opposite and the Adjacent” by Liu Yang
“Toward the Luminous Towers” by Bogi Takács
“The House of Half Mirrors” by Thoraiya Dyer

The stories in Clarkesworld this month are brimming with interesting ideas but not all of them are quite handled in a way that works well for a short story. But at least it is a surfeit of imagination rather than the opposite!

Unfortunately it begins with a story I found to be only so-so. It is by an author I usually like so it was a bit disappointing to me. Jack Skillingstead takes us to a human lander crash on the unspoiled alien world called 51 PegusiD. The twist to “The Despoilers” is the pilot crash-landed with his teenage daughter on purpose and then wrecked any way of communicating with the ship circling the planet thinking that humanity despoils any planet it colonizes. This is a great premise and fertile ground for many different types of story. Unfortunately, Mr. Skillingstead goes for a standard adventure story with little character interest. He does provide enough psychological underpinnings that it is not bad per se, just uninteresting.

Jennifer Campbell-Hicks is a new writer who does not have control of all her writerly skills yet but has an interesting imagination. In “Aphrodite’s Blood, Decanted” she posits a world where self-aware factories have been left behind after a nuclear melt-down occurred within the city walls. The workers have fled and – due to radiation – have never returned and the factory is lonely. The unnamed factory decides to do something to get the workers back while being heckled by the factory across the street. It is a scenario that is sufficiently wild enough that I like it. Then it turns into a love story which is a little much for me. But it shows much promise for the future.

“The Green Man Cometh” by Rich Larson is a rich and engrossing story that should be on award ballots next year. The story is structured as a police investigation as the OCI (Operative City Intelligence) investigates a future bio terrorist who is transporting something in from an off-world colony. The protagonist is Eris – a hard as nails on the outside but very unsure on the inside – cab driver. It is an interesting work, filled with well realized future tech with a terrific main character. I want to say more about this, but you should experience it for yourself. Truly an excellent SF piece if imagination.

The short story by Liu Yang called “The Opposite and the Adjacent” posits an area of space where Pythagorean theory is just a little bit distorted. It is told in diary form read by humans after discovering a dead alien spacecraft. It is short with an interesting idea explored just long enough that it doesn’t outstay its welcome. The sting it its tail makes it memorable.

A writer new to me, Bogi Tacács, takes on future war with a vengeance in “Toward the Luminous Trees”. It concerns what seems to be a never-ending war and the un-named human being who is a combat controller. This is a mélange of interesting ideas that never quite cohere into a story. The future tech is impressive. There is magic involved, or some old kind of technology that is now called magic. There is teleportation. The central person may or may not live two lives or see two lives. It is too disconnected and too full of ideas for this short of a piece. This needs to be expanded to explain the world and the technology in order for it to really work. But, again, I applaud the imagination involved.

Thoraiya Dyer is a very good author who doesn’t quite connect with me in “The House of Half Mirrors.” The story takes place in an Ireland of the eco-destroyed future and the desire to protect the last pristine area from the sheep-farmers. It also involves the Fae and 99 of them who have been trapped on this side due to fracking. It is a story about accepting the outsider, understanding ourselves and relationships as well as the destruction of the ecology. Again, I found it too short to contain all it tries to entertain. As a short story, it is bloated with too much material that doesn’t gel in the frame of a short story. It needs to be given space to breathe in the novel format.