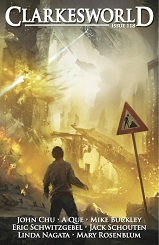 “Fish Dance” by Eric Schwitzgebel
“A Sentry Branch Predictor Spec: A Fairy Tale” by John Chu
“Sephine and the Leviathan” by Jack Schouten
“Against the Stream” by A. Que

Clarkesworld for July has some good work but overall it is a little lackluster this month.

A girl from the worst dregs of a human planet is found to have an unusual talent for music in “Helio Music” by Mike Buckley. This is a tale expressed like a fever dream. Told in the second person, it posits a universe filled with terrible places on rich planets and fighters called the Flayed Eagles who find a use for the musical genius. I don’t want to say more for I think this one should be experienced. It is very literately told so that I was held in a kind of surreal half-life as I read it. The story is simple, a downtrodden young girl’s rise to power, but I was spellbound by the telling. A very short story that would not have worked at any longer length, I look forward to more stories by Mr. Buckley.

“Fish Dance” by Eric Schwitzgebel took me from the sublime of the first story to the ridiculous. The story is simple enough – a daughter and father in an air taxi crash from which the father survives. He can only live though if placed in a virtual reality rosary bead. Will it happen or not? The story is dripping with Biblical allusions to the point that it became way too overdone. Even the main characters’ names are Isaac, Sarah, Rebecca and Abraham. The allusions became much too heavy and the story just became pretentious. The story and characters were way too underdeveloped to sustain the imagery. It is poorly written and too full of itself.

But as much as I disliked the previous story I hold a special dislike for “The Sentry Branch Predictor: A Fairy Tale” by John Chu. This takes the worst aspects of the new wave of 70s SF and replicates it in “new” form. The first two thirds is a dry as dust talk about the development of a new computer, called Sentry, which didn’t come to fruition. Ah, but this is so clever – the real story is told in the footnotes! And it is a love story between two of the workers on the project. And look, their relationship follows the new computer algorithms. Wow! Pure boredom for 11 computer pages followed by a sketchy story told in footnotes in 4 more pages. If this was not by a Hugo winning author it would have never passed the slush pile.

“Sephine and the Leviathan” is a very good SF story by a writer I have not heard about before, Jack Schouton. It takes place on an alien planet. A human war ship crashed on this planet years ago and is kept from leaving or communicating with Earth by the leviathan, a floating war ship of the enemy called the Fractured. It concerns a sister’s mission to rescue her brother from the leviathan. The tale is told non-linearly (starting from chapter 3) with some interesting twists. This was a good solid piece of work.

The final short story is another short one and rather wistful in composition. “Against the Stream” is the story of a man living backwards through his life due to a disease. This trope is an old one (my first encounter with it was Merlin) but the writing evokes a poignant sense of the choices we make in our lives and the negation of life that those choices make. The protagonist has the chance to redress some of them. A. Que writes it well enough to be affecting.