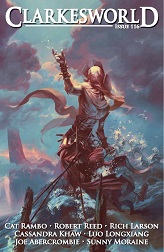 “Left Behind” by Cat Rambo

“The Universal Museum of Sagacity” by Robert Reed
“Breathe” by Cassandra Khaw
“Jonas and the Fox” by Rich Larson
“Away from Home” by Luo Longxiang, translated by Nick Stember

Cat Rambo’s “Left Behind” at its core is an interesting story, but needs editing to function as well as it should. Set a few decades in the future, Shi works to place the minds of the old into colony ships that will take their hibernating cargo to the stars. Only the elderly are fit for the task since modern technology has made contemporary minds a poor fit for the ships. When Shi is introduced to Cianna, a woman who’s children are trying to push her into the choice, she (in a technologically gender fluid society, this is a changing designation) meets an extraordinary mind with the ability to imagine deeply.

There is much to like about the story. The conflict between parent and children, Shi’s own worries and issues, and how modern society has changed what humanity means is interesting, but the author wanders off into world building that fails to further the story line. At almost 6200 words, the story felt overly long.

“The Universal Museum of Sagacity” is an interesting story that opens the door to a number of interesting insights, but leaves us at the threshold, without answers. The story starts with the narrator’s childhood fascination for the mysterious aunt Maddy who was his great uncle’s first wife. We then move into the mid 21st century where Colin, the narrator, works in accounting at PinPoint, a futuristic super Google. There SETI and his long held interest in his mysterious aunt combine in an unexpected way.

In this novelette, Robert Reed touches upon some interesting ideas, specifically the value of discovery and innovation as well as science vs aesthetics. However, the piece doesn’t have enough of a plotline to be an excellent narrative and lacks the details and length to form a truly distinctive think piece. In the end, it is a solid story and fairly enjoyable, but not ground breaking.

“Breathe” by Cassandra Khaw uses the title motif and second person narrative to tie together her story of Alice who is working in the dark sea of a far off planet to harvest the Noctiluca Janus, a self-sustaining algae that is the only life on the planet. Unfortunately, despite the well written prose the author tries to mix loss of religious faith, undeclared love, and abyssal fears into 2700 words. Where the first story of this issue is overly long, this lacks enough length to tie the disparate elements together. There simply isn’t enough information given to explain the religious element, nor is the reader let in on Alice’s epiphany about the Noctiluca Janus.

“Jonas and the Fox” by Rich Larson is set in a post revolution farming community. Fox is a poet and fugitive from the new junta after the revolution starts to eat its own. He is hiding in the body of his nephew who is brain dead after an accidental fall. His Nephew Jonas, the other title character, must come to terms with the stranger inhabiting his brother’s body. The novelette cleverly links the revolution’s rewriting of history with the disconnect between Fox and his new body. The story is touching, and manages to keep you guessing as to how it will end. Larson is a young author and well worth keeping an eye on. If this piece is representative of his work, we could be looking at an excellent new talent.

“Away from Home” by Luo Longxiang, translated by Nick Stember is ostensibly the story of Zheng Weihan and his relationship with Han Dan, a young woman who is more than what she seems. In fact it serves as an introduction to the author’s Planetship universe. The story itself is nothing special and the reveal is fairly obvious far in advance, but the world building, which is the actual purpose of the story, is interesting and makes the reader want to explore a little more. While not a great novelette, it is worth the time to read.

Robert Turner is a professor and longtime SF/F fan.