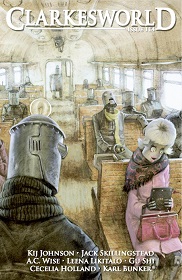 “Seven Cups of Coffee” by A.C. Wise
“The Governess with a Mechanical Womb” by Leena Likitalo
“Coyote Invents the Land of the Dead” by Kij Johnson
“Chimera” by Gu Shi (Orig. published in Chinese in Science Fiction World, Oct. 2015)
“The King of Norway” by Cecelia Holland
“Gray Wings” by Karl Bunker

This issue of Clarkesworld has seven interesting stories, written in different eras and places around the world, even to outer space. The variety of genres is what makes this issue worth a read.

In the first science fiction short story “Salvage Opportunity” by Jack Skillingstead, Badar is a salvager and the only living representative on the Planet Kepler 186 F. His mission is to salvage the wreckage of Leviathan, an enormous spaceship, positioned close to his shelter. With him inside the shelter exists the Companion, an Android with two important roles: to explore Leviathan and build a list of things for future salvaging, and offer a simulation of discussion, so Bandar can overcome his solitude. One day, though, something unexpected happens, for one of the salvage opportunities, another Android, seems alive and with an unrestrained intelligence. By using interesting dialogue, the author keeps us reading from page one until the last. The best part of the story is the conflict between human logical process and the android’s artificial intelligence. Through this, the message that any creature with intelligence, artificial or not, can feel loneliness is given effectively.

Next comes the short science fiction romance “Seven Cups of Coffee” by A.C. Wise, where the protagonist describes herself holding a cup of coffee in her past, present and future. The story speaks of a time traveler who tries to undo her one and only mission after feeling regrets about its outcome. Her desire will become an obsession while she will fall in love with the woman she tries to save. Even though the storytelling is captivating, it lacks settings. The author mentions the time but not the place, which doesn’t help us create a complete image. The continuous switch between first-person and second-person narrative is performed brilliantly, but then again, the story leaves us at the end unsatisfied with a hefty list of questions.

In the “The Governess with a Mechanical Womb” by Leena Likitalo, Saga and Agneta are two sisters living a Robinsonian life, in a snowy and isolated location of Finland, during a post-alien invasion. After both of their parents passing, the invaders, who call themselves Victorians, have assigned a Governess to care for them. Their caretaker, however, is a convert, a mechanical creature that used to be a human female, but for some reason decided to surrender her body to the Victorians. Agneta, as the older sister, has more memories of her parents‘ death, as well as knowledge about the invasion, than her sister. Since the Governess represents everything they have lost, she cannot but dislike her. Soon, though, Agneta’s judgment will be clouded by doubt and she will realize that behind unexplainable conditions, such as this convert, there sometimes hides a strong reason.

The story is based on a common theme of the genre, the alien invasion, and even though it is mentioned briefly, it successfully gives us a clue to what happened. The dialogue between the sisters, which represents ignorance and tolerance against hate for their oppressors, as well as the dialogue between a young child and someone who has denied her humanity, is so well crafted that it forces us to sympathize with everyone but the Victorians.

In the short story “Coyote Invents the Land of the Dead” by Kij Johnson, a coyote called Dee and her three sisters, who happen to be different kind of animals, decide to journey into the world of the dead for Jace, Dee’s dead love partner, even if they risk never returning. In a coastal scene, where the souls of the dead are either stone and marble, which if you bring them near your ear you can hear their voices, or have the shape of sea creatures, Dee will desperately look for Jace, despite her sisters’ pleads to stop. However, it might be too late when she decides to move on. Finishing this story, I had a lot of questions regarding the physiology of the characters, who exactly was the narrator, and about the setting. I felt like I was reading the middle part of a decent short story.

In the science fiction short story “Chimera” by Gu Shi, rock star legend Evan Lee will do everything to save Tony, his son‘s, kidney. The solution will come from his ex-wife, who is a brilliant genetics scientist. Along with that solution, though, comes a scientific breakthrough that will revise human history. Tony grows up, with a different identity, to solve crimes involving AI. There will be a case, however, which will bring his real identity back to the surface. Excellent reading, even though it is translated. “Chimera” is the reason to acquire this month’s Clarkesworld. Each scene is titled with creatures from Greek mythology, entirely related to the theme. By moving us back and forth in time, and from Earth to the space station Eden, the author creates a captivating atmosphere, worthy of every second of our attention.

In the historical fiction short story “The King of Norway” by Cecelia Holland, we travel to ancient Scandinavia, during the wars between Norway and Denmark. There, a Jomsviking called Conn Corbansson makes a promise to his King, Sweyn Tjugas, that he will sail against Hakon, the Norsk King, and he will not come back until he is the King of Norway. An easy thing to say, especially when you are drunk, but not that effortless to accomplish, as Conn will realize. The story is mostly focused on a magnificently detailed naval battle and the importance of warrior’s honor in that era of human history. The action is continuous and captivating. As we read, we feel like we are a Jomsviking, fighting the enemy aboard one of the ships.

The last short story is “Gray Wings” by Karl Bunker. In a futuristic world near Lagos, Amy is flying in the Kitaroharo Race, using wings attached to her body through the use of nanotechnology. After an accident during the race, Amy lands in a small barn where she meets Dabir, a young man who will help fix her wings, and his grandmother. While she waits for her wings to heal, she will be fascinated by Dabir’s kindness and openhandedness. This flash fiction story explains briefly the way notechnology works. It speaks of Amy’s gray skin, but it doesn’t explain the reason for this skin color. I wanted to know more about the character, but before I could the story ended.