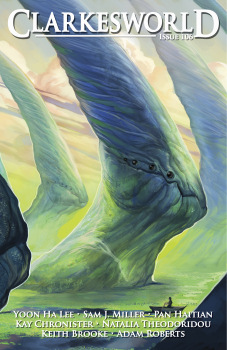 This is a compelling issue of Clarkesworld. I find that each of the stories revolve around families. Either the ones you were born into or the ones you must make during crises.

Family is of utmost importance in Sam J. Miller’s “When Your Child Strays from God”. It‘s the story of a mother and son and the ties that bind them. The mother is the wife of a proper Christian pastor who has a rebellious teenage son named Timmy. She discovers that he is taking a new drug called “spiderwebbing.” This drug is the only SFnal part of the story. It‘s an hallucinogen that creates a psychic link between anyone who uses the same “branch” of the webbing. Timmy has run away and his mother tries to follow by taking some of the drug. In so doing she learns more about her son than she ever knew but also learns more about herself. The story hooks us with its humor and then moves into vulnerable territory in order to make its point. My only caveat is that I am not sure that the SF content adds anything to the story except as a metaphor for vulnerability and honesty. It is a moving and lovely story, and with the drug is nominally science fiction. But is the science fiction necessary for the story to work? I am not sure.

“Further North” takes place in an alternate world. At least I think it does. Not much is explained in Kay Chronister’s story. We have two Turkish sisters (again that theme of family) who have been sent to Alaska for two reasons: 1) To pull blood from the large (maybe horse sized?) tapeworms in order to combat the disease that the tapeworms have visited on the animals of Earth, and 2) to get the elder sister, Aliye, away from Turkey. Aliye has contracted the same parasitical disease that afflicted her family’s sheep in Turkey. This has never happened before so she would be considered patient zero if the disease were to attack humanity. To save her and everyone else she has been sent to live out her life with her sister.

The story is about the family coming to terms with the realization that Aliye does not have the parasitical disease. Unfortunately, the story is a bit murky and I feel that I should have cared more for the characters, but this one left me cold.

Natalia Theodoridou has written a story in various fragments. “Android Whores Can’t Cry” is told from the viewpoint of a reporter named Aliki, files from her hard drive, Aliki when she is on drugs, and Brigitte the android whore of the title. All of this gives us unreliable pictures of the situation, but these very interesting fragments don’t quite fit into a cohesive whole. Aliki goes to a planet that is rebelling against its rulers. Her contact is an old friend of hers named Dick (which correctly identifies him) and Brigitte. The android is part of the rebellion. Dick has issues with Aliki’s friend who walked out on him and he takes it out on the android. Aliki researches her story visiting the massacre market which worships maiming and death to honor the rebels murdered here. There is a whiff of Tiananmen Square and Algiers and others rebellions here. The pearl is also used as a central image. The android is growing nacre on her skin. The drug Alika takes is called pearl. Nacre in nature is seen as a beautiful protection against foreign irritants. The story seems to be about too many things that swirl around each other. Is the theme about the ways we deal with anger and hate? Is it about protecting ourselves from others? How people respond to oppression and violence? The images are sharp and it isn’t quite the total muddle it seems. That said, it almost coheres, though not quite. Talented work from a writer new to me.

“The Hunger Tower” by Pan Haitian is a very straightforward story (translated by Nick Stember from the Chinese). It concerns a group of people who have crash-landed on an alien planet. None are given names, just job descriptions such as Captain, Priest, Boiler Tender, Chemistry Professor. These act out their various roles in rather predictable ways as there is a ravenous beast chasing them to the tower of the title where they are besieged with not enough food to last the three months to rescue. If you have read Lord of the Flies, you know what happens here.

Yoon Ha Lee is one of my favorite authors. He writes in a beautiful elliptical style in a universe of his own creation that sits well with me. “Snakes” is another gem from this wonderful author. Again, it revolves around family. Two sisters go to war together, one is killed and put into stasis in “a fluid of suppositions.” The other sister tells the story starting near the end of her quest to resurrect her sister and taking us back to the beginning of their journey. Along the way the narrator becomes the ship she is piloting which eventually arrives at a black hole (which Lee calls “the seethe”) and the enemy aliens who live nearby. The situation is personal but the world developed is purely SF. Lee’s stories are to be lived in – let the prose carry you away and know that everything that is mysterious will be explained by story’s end.