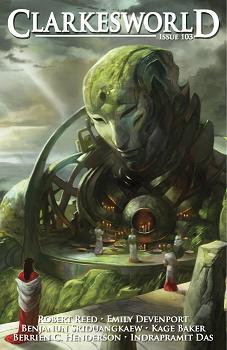 “The Empress in Her Glory” by Robert Reed
“Let Baser Things Devise” by Berrien C. Henderson
“The Petals Abide” by Benjanun Sriduangkaew
“Postcards from Monster Island” by Emily Devenport

The ubiquitous Robert Reed sees the world slightly askew. In many of his stories he tries to show us the unusual viewpoint. In “The Empress in Her Glory” he posits that aliens take over the earth. They have done it, but humanity has no idea that they have been invaded. The aliens decide there needs to be a human to make administrative decisions. They eventually settle on Adrienne, a predictor for an insurance company and an inveterate blogger. When she gets information about a Chinese Dam that will fall, she shares it on her blog. The dam breaks, killing many and suddenly she becomes the prophet of her age. She styles herself the Empress of Everything and sets up shop to let the world know what will happen if…

Reed is a canny writer. We see the aliens manipulating Adrienne so a surprise story it is not. Adrienne realizes that her information comes to her from somewhere. There is no breakthrough moment. It’s a quiet, almost mundane work, about a woman with unlimited power which is eventually taken away from her. This is a slow and compelling read from Mr. Reed.

Berrien C. Henderson is a writer new to me. “Let Baser Things Devise” is not quite a fully realized work, but shows great promise. In an Alternate America Chimps have been uplifted (shades of David Brin in his “Uplift Series”) and are being sent to the moon to work. In this world, intelligent robots have also been created to work on the moon. The story concerns Pierre, the ape, and Tsuk, the robot. Pierre is the POV character and his disquiet at being not quite a chimp and not quite a human are the backbone of the story. And By the end it becomes an unrequited love story. But while the premise is interesting, the writing is not deep enough to display the profound sadness of love deferred. That said, Mr. Henderson is a writer to watch.

In all I have read by Bejanun Sriduangkaew she tends to write a bit too ornately for my taste. “The Petals Abide” is no different. But if you work through the overwriting it is a beautiful gem by story’s end. This one is a convoluted work about two worlds at war. One is the Hegemon–which seems to be much like our world in the future. The story itself takes place on the world of Cotillion, however. The people of Cotillion have biologically changed themselves to become completely prescient. An assassin from the Hegemony is brought to Twoseret, who is a “memorialist.” We don’t know what that is or why the assassin has been given to Twoseret as a prisoner. In fact we know very little and unfortunately the ornate language does not grant easy access. After rigorous reading the story becomes clear and clever but it would have been very moving, as well, if it had been toned down a bit – less rococo would avail much in this instance.

“Postcards from Monster Island” by Emily Devenport is a lightly humorous take on monster movies – Godzilla in particular. In those movies the monsters are evil creatures that need to be destroyed before they go on a rampage throughout the whole world. The military eventually destroys them or defeats them and the world is saved. This story, however, takes the “monsters of radiation” theme in a different direction. In the first place, the viewpoint character is a young woman (Bernadette) who is working three jobs with a dog and four cats and is sick with a monstrous flu. She is neither the young and plucky friend of an important scientist, nor the important scientist. The monster does come out of the water and (as in the movies) is attacked by all the military might of the country. The first monster is followed by others. But they are not at all the brutes that these kind of movies proclaim them to be. These monsters are here for a benevolent purpose. Bernadette and her cohorts realize this and try to get the military to stop bombing the city. This is a refreshing, breezy counterpoint to monster movies.