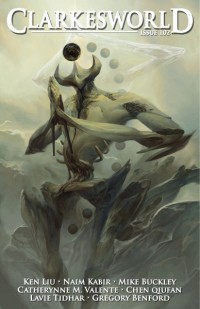 “Slowly Build an Empire” by Naim Kabir
“Cassandra” by Ken Liu
“The Long Goodnight of Violet Wild” (Parts 1 and 2) by Catherynne M. Valente
“All Original Brightness” by Mike Buckley
“Coming of the Light” by Chen Qiufan, translated by Ken Liu
“The Clear Blue Seas of Luna” by Gregory Benford (not reviewed—reprint, first published in Asimov’s Science Fiction, October/November 2002)
“The Book Seller” by Lavie Tidhar (not reviewed—reprint, first published in Interzone #244, January-February 2013)

Naim Kabir’s “Slowly Build an Empire” follows Shinsuke Takinami, one of a few remaining non-telepaths in futuristic Japan. Called hikikomori, they’re segregated and sterilized by the telepathic population, viewed as social parasites incapable of true emotion or contribution. Shinsuke and others like him must find a way to prove their worth, so that they might be accepted and integrated into society. Their method of doing so is effective and dramatic, though also filled with betrayal.

In many ways, this story feels like a wish-fulfillment fantasy. ‘Hikikomori’ is a real-world word used to describe extremely reclusive people, and is sometimes meant as a pejorative. Some do consider hikikomori to be a social problem, and see them as parasites living off of others (usually their family). That the story’s ‘normal’ population are all telepaths, leaving the hikikomori isolated mentally as well as physically, is what real hikikomori often feel. There’s a thread of reality woven through the beautifully written narrative, which makes it all the more effective.

The titular character of Ken Liu’s “Cassandra” isn’t a villain, no matter what a certain red cape-wearing superhero would like everyone to think. A clairsentient who sees the future through the objects she touches, Cassandra, like the figure from Greek mythology, can never convince anyone that her visions are real. When one attempt to avert the future inadvertently makes it worse, the earnest but misguided man-with-an-S-on-his-chest decides that she’s a villain, insisting that nothing would have gone wrong if not for her interference. Cassandra knows better, and so the two of them enter a covert contest of will, each doing what they feel best and struggling against one another when it becomes unavoidable. This isn’t a wholly cynical tale, though; what really makes it interesting is that neither Cassandra nor her carefully-unnamed foe are presented as wholly right or wholly wrong. She believes that they aren’t so different; they have a common goal, but go about it in vastly different ways, fueled either by righteousness or foresight, with neither indicated to be more valid than the other. Were it just a cynical story about the naiveté of old-fashioned superheroes, it probably wouldn’t work, but as it is, it works very well.

While at heart it’s a story of love and loss, Catherynne M. Valente’s “The Long Goodnight of Violet Wild,” Part 1 of which appeared in the January issue of Clarkesworld, reads like it was written on an acid trip. What might have been whimsical is often borderline-incomprehensible, the characterization of the narrator frequently lost amid paragraphs that go far overboard with bizarre imagery. The tale has plenty of substance, but it takes a backseat to quirky, off-the-wall narration and side-characters who seem calculated to fuel the story’s forced eccentricity. The plot is simple enough, though the execution is definitely not: the protagonist loses her boyfriend, and in her grief she travels to other countries, but the poignancy of it is destroyed by endless oddities like squirrels who give birth to time, and bubblegum storms that make a person think they’re someone else. Had such things been used only in moderation, the story would have worked much better, but as it is, the entire narrative is made up of things like that. Even the genre is difficult to define: is it SF? Is it fantasy? At first glance it appears to be the former, considering the number of fantastical creatures, but few of them are given adequate explanation—and what explanation is offered is couched in such convoluted description as to be unfathomable. There are also elements of SF, primarily technological, but they’re few, and have far less bearing on the plot.

Mike Buckley’s “All Original Brightness” is a rather creepy yarn about betrayal and body horror. The narrator, Mitchum, is a former Marine severely wounded in the line of duty, and who now resides in an ‘immerso’: a portable life-support system that allows him not just mobility, but the ability to see and hear. The Marines were all promised an immerso, should they become so badly injured, but the supply can’t meet the demand; Mitchum faces the impending loss of his, which will leave him deaf, blind, and only able to be fed through a straw. He has little time and few options to decide what to do about it. The story is solid, and the characters well-developed, but there isn’t a great deal of originality to it.

The narrator of Chen Quifan‘s “Coming of the Light” has a problem: if he doesn’t come up with a way of marketing his company’s client’s cell phone app, he’s out of a job. The prior plan was a disaster, but his proves to be brilliant—it’s consecrated by a Buddhist monk, and millions of people download it in an attempt to get cheap and easy good karma. The company makes money hand over fist, but they soon realize the app is giving them much more than they bargained for. Stories crop up of people being healed of disease or infirmity after taking pictures of themselves with it, the phenomenon spreading so far and so fast that it’s impossible to dismiss as hoaxes. Zhou, the narrator, becomes terrified of what he’s created, but that’s only the beginning. His simple idea literally takes on a life of its own.

Religion and technology have often coexisted uneasily, but this story explores what might happen if they were to become unexpected partners. While it’s not idealized, it’s also not completely cynical, and it’s certainly thought-provoking. The writing flows well, and gives a real sense of dread as Zhou realizes just how far over his head he’s in.