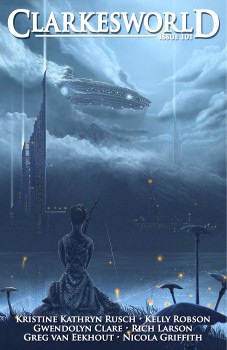 This is the 101st issue of this fine SF magazine. Here we look at the beginning of what will hopefully be the next 100 issues.

Kristine Katheryn Rusch has been writing her brand of excellent SF since the late 80s and she is still a vigorous presence in the field. “The Last Surviving Gondola Women” takes place in an alternate USA, circa 1890. This is a realm of magic showing up in people who have an affinity for certain things: engineering or sparking fires, for example. The unnamed protagonist is one of the few women in the service of Allan Pinkerton. Before the opening of the story she has tracked down all the Gondola Widows of the title. In this reality, the south attacked the north a second time in the 1880s via a gondola attack on Chicago. (The gondolas are commanded by those women having an affinity for engineering.) Each ship and captain are bonded together. If a gondola is destroyed the captain becomes a widow. We see the attack on Chicago by the Gondolas and the bloody aftermath of the killing of all the widows who remained as traitors. Here, a final widow is found hiding in plain sight and in a dangerous position. The Pinkerton agent must handle the problem.

This is a fine story, with an interesting alternate world and a pleasant protagonist (who herself has some secrets.) Rusch uses tight, clear prose to tell her story. It is an enjoyable read, if not something that will stick too long in the memory.

Gwendolyn Clare is a writer new to me. Her “Indelible” is a YA story set on an Earth which has been visited by aliens sometime in the past. The Shurker were placed into a ghetto and left there after they arrived seeking asylum. There is much hatred between our two races. Even with that strong hatred, Cheng, a human girl, grew up with an alien as an adopted sister. They loved one another but her sister has died and Cheng is in the ghetto trying to find her sister’s relatives. This one is a tale about racism, focusing on the people who try to make a difference. It is fairly simple but shows good promise for future work.

The next story is not light or pretty at all. “The Three Resurrections of Jessica Churchill” by Kelly Robson is about alien invasion, rape, and the events of September 11th, 2001. Jessica is a First Nations person in British Columbia, Canada, who in the course of two days is raped, invaded by alien bacteria, dies and is resurrected three times with the atrocity of the twin towers playing out in the background. The irony of a national disaster which received tons of reporting playing out against a single woman’s disaster that is rarely reported even as thousand are raped all over the world gives this story added depth. The fact that this girl is being fixed up and kept alive by an alien species creates another disconnect between power and self-control.

This is a rare piece asking sensitive questions. When is a crisis important enough to be noticed? Is the rape of so many worldwide less important than the attack on the Twin Towers? September 11th was a terrible thing and deserved the reportage spent on it. But is this girl’s struggle not as important? Interesting questions that come from such a short story.

“Meshed” by Rich Larson is a story about how new technology affects the inner lives of people. It concerns a recruiter who is attempting to sign a basketball player who must be meshed as part of his contract. To be meshed is to have subcutaneous nodes implanted in order to broadcast every part of your movements/emotions to a feed. You can literally feel what the person is feeling when they make that perfect pass or that incredible hoop to win the game. Oxford, the player, is reluctant to get the mesh, as is his father for him to receive it. The effects of advancing technology on this microcosm of humanity is a single example of how we deal with a rapidly changing world. This lovely little story has a solid emotional core based on real technological advances. It is a very good piece of science fiction.

So, Clarkesworld again shows how vital it is to the continuation of short fiction within the genre of science fiction.