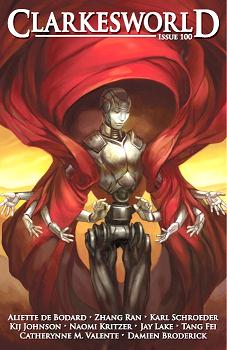 For this, the 100th double issue, editor Neil Clarke has given the magazine a decidedly Asian flavor. While several of the stories are reprints and are not reviewed here, the others offered a nice blend that made me want to taste them all. Through a partnership with Storycom in China, Clarkesworld is now including English translations of Chinese reprints for the first time. The Kickstarter campaign used to fund this was so successful they will also be offering stories from other languages in the future. Here’s wishing them success!

Beginning this issue is “Three Cups of Grief, by Starlight” by Aliette de Bodard, which is a nice story of life, death, renewal, and grief in the far future. The author presents us with three characters following the death of Duy Uyen, and we see the accompanying grief and the manner in which each deals with it. Quang Tu, her son, will stew over the loss of both her being and her memories until the bitterness overtakes him. Tuyet Hoa, a fellow researcher and the receiver of Duy Uyen’s memory implants, must come to terms with both the loss and the fact that the woman will live on in her own mind for the remainder of her days. Duy Uyen’s daughter, now the mind ship The Tiger in the Banyan, is no longer human. Her grief is both the least and most human of the three, for in the end she is left only with her own memories of her mother, and is content with those. This story is well-written, with a lyrical lilt to the language and structure. Told in three distinct parts, it makes a wonderful whole.

“A Universal Elegy” by Tang Fei is a story of insanity and recovery. Alia, recently separated from her former lover Julian, is soon to leave Earth to travel to Dieresis with Hull, a man she just met. The story is told through a series of missives she sends to her brother (whom we never meet) describing her life and the events that make up the whole of her life experiences. That’s a key concept, by the way—parts making the whole. Does removing one of the former fundamentally change the latter? There is much to like about this story. The writing is clear even when the concepts aren’t, and Alia has a strong voice. The story itself is open to many interpretations. Personally, I get a Shutter Island vibe—though with a more upbeat ending.

There is an AI watching you, and has been for a long time. Not the “destroy all humans” kind, but the fuzzier “I like cat pictures” kind. “Cat Pictures Please” by Naomi Kritzer is a charming tale of an unintended AI lurking behind your monitor, watching your every move (and cat picture posting), and wanting desperately to help you—because, let’s face it, humans need all the help they can get. Only how does one, lacking a physical body, manage such a feat? Logically, of course! This AI’s (I can’t help thinking of it as a “she,” don’t ask why… I haven’t a clue) attempts to intercede in three people’s lives and change them for the better, is actually an apt description of what such a mission would require. This is the best evidence yet for why we should have no fear of the approaching singularity.

Kij Johnson, with “The Apartment Dweller’s Bestiary” gives us a cute list of the types of critters we are likely to encounter when we live alone. Everyone has shared a dwelling with one of these “animals” in their life. I’m pretty sure I’ve hosted more than half the list myself. I liked this work… right up to the last line. I don’t know why, but it kind of cheapened it for me. Other than that one complaint, this was a nice read.

“Ether” by Zhang Ran is a novelette of the near future, with a topic that is ripped from the front page of contemporary newspapers. The story is told in first person through the eyes of an unnamed forty-five year old man, abused as a child, and carrying serious issues with authority figures. The internet has become a bland playground of meaningless conversation, but he soon learns there are people around him who still meet in secret to silently discuss important issues. The manner of their discussion is novel, and there is a nice tale buried in here about this man’s relationship with his father. Unfortunately, though well-written, the plot goes a bit off the rails for me by the final third. The reasons behind how society got to this point will only be accepted as plausible by the same crowd who believe the U.S. government was behind 9/11. I think the issue might arise in the translation. I doubt the author set the location of the story in the U.S., and while such a plot might be plausible in China, it collapses of its own weight when set here. Taking that into consideration, reading the tale while mentally transposing locations allows me to focus on the sub-text without being pulled out of the narrative.

A love story spanning decades and the entire solar system, Jay Lake’s “An Exile of the Heart” is a sweet tale of love, betrayal, and sacrifice. Sixteen year old Trieste Maria Kaolung Delgado-Richter de Cleone (a mouthful, that) is the Heiress-Apparent of Cleone Station, a large and powerful station occupying the L1 point between the Earth and the moon. Standard intrigue ensues, and she is shipped off to a lesser station to live with her uncle. More intrigue, and an assassination attempt, place her in the care of her One True Love, Aixelle, the Biomistress of Brigante Station. This is a great yarn, told in the style of The Princess Bride. In fact, I fully expected to see an “As you wish” pasted onto the end. It doesn’t matter, as I’m a sucker for these kind of stories. Especially when the love story leads to a solar system-wide civilization.