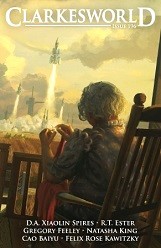 “The Fortunate Isles” by Gregory Feeley

The six works of fiction in this issue are evenly split between short stories and novelettes.

The narrator of “Symbiosis” by D.A. Xiaolin Spires is selected to bear a child in a spacefaring future where this is only allowed to certain individuals. I should say required of them, as the narrator has no choice in the matter. After accepting the burden of pregnancy reluctantly, the narrator goes on to form a special connection with the unborn child, leading to an unexpected discovery.

Despite a great deal of futuristic content, much of the story deals with the experience of pregnancy in ways not much different from the norm. (An exception is the use of implanted hydration tubes to supply water to the fetus, the reason for which escapes me.) The climax of the story is enigmatic, and might be interpreted as a delusion on the part of the narrator or as something mystical. Nearly all of the text consists of long paragraphs, with a few short paragraphs and lines of dialogue. These lengthy blocks of uninterrupted prose require extra effort to read.

“Anais Gets a Turn” by R.T. Ester is the issue’s longest story. In some way or other, a worldwide consciousness arises, perhaps as a combination of the biosphere and electronic communications. (The premise is not completely clear.) It plays countless games of tic-tac-toe with the two halves of its mind. This is done by manipulating events in the outside world. A tattoo of two crossing anchors, for example, serves as an X when created at a certain time and place.

The protagonist becomes involved with a group trying to end the games by forcing one half of the consciousness to win, instead of having endless draws between them. (The protagonist lost her job because of one of its actions.) While on a cruise ship, she does the best she can at this difficult task, while facing a dark side of her past and making a new friend.

Although the story is completely serious, the premise can be seen as comic or even ludicrous. It is difficult to understand how the consciousness causes things to happen outside its mind. The characters are appealing, and the protagonist’s emotional journey is more interesting than the plot.

In “Sharp Undoing” by Natasha King, people have implants in their brains that allow them to share knowledge. An unexpected effect is that one person can absorb all the memories from another, causing the victim to die. This leads to a complete breakdown of society as people steal knowledge from others.

One such implant in a young man’s brain allows his consciousness to survive in the mind of the person who steals his memories. This process continues through several individuals as each one dies at the time of losing memories, resulting in a narrator with multiple identities in one body. The plot deals with a would-be dictator kidnapping the narrator with the intent of stealing knowledge, unaware of the consequences.

The premise is intriguing, and the author does a fine job of writing in the voice of someone with more than one identity. Parts of the plot are melodramatic, and a revelation about the relationship between the young man and the villain of the piece is overly coincidental.

The novelette “The Fortunate Isles” by Gregory Feeley involves a man in a station on one of the moons of Neptune. Six people arrive and force him to join their project to build a gigantic structure in the atmosphere of Neptune. This effort involves mysterious entities that have evolved beyond ordinary artificial intelligences, and will lead to even more advanced beings in the future.

I have probably explained the premise badly, because much is left unclear. The super-advanced AI’s remain enigmatic. Portions of the story are narrated by one of the beings of the far future, who is even more of a mystery. The narrative is full of interesting futuristic details, and creates a genuine sense of wonder in the scenes set within Neptune, but its opaque premise is frustrating.

“Zhuangzi’s Dream” by Cao Baiyu, translated from Chinese by Stella Jiayue Zhu, consists of a brief prologue, five long sections of narrative not obviously related to each other, and an epilogue. In essence, it is a novelette made up of five short stories. In brief, these involve an enormous fish rising from the bottom of the ocean and changing into a land creature; two rival nations, each existing on one of the antennae of a snail; two galaxy-spanning entities in conflict, who are brought to an understanding by a third; two men arguing over an artificial fish; and a man in the future using a time-traveling device in the form of a butterfly to observe an ancient philosopher.

These vignettes are interesting in themselves, and feature multiple science fiction premises, even when they venture into fantasy. The tale of the giant fish, for example, depicts the evolution of life on Earth, with a great deal of scientific detail. Other sections feature artificial intelligences and androids.

The prologue and epilogue, as well as the fifth story, make it clear that the piece is based on an anecdote about the Chinese philosopher named in the title, who is said to have dreamt he was a butterfly, then wondered if he was a butterfly dreaming he was a man. (It is possible that an allusion to Ray Bradbury’s classic story “A Sound of Thunder” is intended as well, as the man from the future wonders if the potential loss of the artificial butterfly will change history.)

The resulting work is richly imaginative. It is not always clear how the disparate sections are meant to fit together into a whole.

In “Pearl” by Felix Rose Kawitzky, the staff of an observatory in orbit around a planet outside the solar system studies the nature of dark matter. The main character uses garden slugs in an attempt to create objects consisting of exotic matter within their bodies. The result of this bizarre experiment is very strange indeed.

I have explained the premise of this story poorly, because it is difficult to follow. The combination of astronomy, physics, and biology makes for a unique concept, but one that is implausible and confusing. The story is dedicated to the great astronomer Vera Florence Cooper Rubin, and a brief prologue dealing with the creation of the observatory in her honor is much more realistic and understandable than the rest of the story.

Victoria Silverwolf has to remember to buy the Sunday newspaper tomorrow.