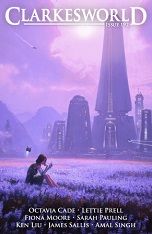 “The Slow Deaths of Automobiles” by Fiona Moore

“Shining Bursa and the Listening Post” by Sarah Pauling

Half a dozen short stories and a novella, all science fiction, appear in this issue. The extremely wide variety of settings, concepts, moods, and themes in these works prove that the field remains vigorous, with few limitations.

“The Slow Deaths of Automobiles” by Fiona Moore takes place in a future of sentient computerized cars. Two close friends, both vintage automobile buffs, work to keep an old vehicle in good condition. The way this should be done leads to conflict between the two. The car’s own desires have to be taken into consideration as well.

The story is told in a mixture of first and second person; one of the friends addresses the other as “you.” Along with the fact that we are never given their names, and only a single tiny clue, possibly misleading, as to the sex of one, they remain vague characters. The car, on the other hand, has a name and is always referred to as “she.” Perhaps the author intends the automobile to be a more vivid character than either human being. In any event, this technique has a distancing effect, lessening the story’s impact. Those who enjoy maintaining aging vehicles may still enjoy this futuristic version of their hobby.

In “Sub-son” by Amal Singh, a man arranges to have an artificially grown duplicate of himself produced when he dies. His mother accepts the replica as her son, denying that he ever died. Other relatives react in different ways. The replica’s failure to appear at the mother’s deathbed is explained by a plan he has in mind.

The author depicts family relationships in all their complexity in a convincing manner. The legal status of the duplicate is dealt with in a thoughtful, realistic way. Some may be able to predict the story’s ending. Western readers will appreciate the work’s vivid portrait of Indian culture.

“Live Update” by Lettie Prell involves a project to transfer consciousness into a form of virtual reality. The intent is to preserve the minds of great scientists in order to have them continue to work on society’s problems. The procedure is one-way only, as it results in the death of the body. The protagonist agrees to participate in the pilot program, along with several technicians, partly because she is an important biologist, working on life extension. More importantly, she is dying of cancer and is a member of the family controlling the corporation in charge of the project.

The people inside the VR world, with no way to return, discover that something has gone wrong. The environment is incomplete, and memories of the past seem as real as the present. Technicians outside the project keep rebooting it, in failed attempts to solve the problem, threatening the existence of those inside. Making use of a traumatic memory of the past, as well as metaphors from biology, the protagonist struggles to help her fellow guinea pigs improve and preserve their new lives.

This lengthy synopsis captures only the bare bones of a complex, multilayered novella. Despite a narrative structure that alternates scenes in virtual reality with flashbacks to the physical world, the plot is never confusing. The characters are fully developed, three-dimensional people.

The story includes gay, nonbinary, and disabled characters, and their presence is far from being a case of virtue signaling. Instead, they are fully integrated into the work in an appropriate way, avoiding tokenism. In addition to the story’s emotional appeal, it offers new ways of looking at consciousness, virtual reality, and artificial intelligence.

“Rivers Bend” by James Sallis takes the form of emails between an author and an aspiring writer, who quickly reveals itself to be an artificial intelligence. This brief tale makes for pleasant reading, and avoids the navel-gazing that authors often fall into when they write about their profession, but is a minor work.

“Border Run” by Octavia Cade takes place in a future world of environmental degradation and starvation. A reporter joins the crew of a ship that hunts down and destroys illegal fishing vessels. He witnesses the destruction of such a ship, as well as the desperation of refugees fleeing their famine-struck homeland in a long and dangerous voyage to one of the few safe places on Earth.

This is a grim, violent story, in which horrible ethical choices must be made. A major speculative concept I have not mentioned is the presence of deadly seal-like animals, who serve the ship as live weapons against the criminal fishing vessels. They lead to a particularly gruesome scene, but are not entirely necessary to the plot. They seem like something out of a horror story, and are out of place in an otherwise realistic version of dystopia.

In “Shining Bursa and the Listening Post” by Sarah Pauling, a man, possibly a humanoid alien, is pursued for centuries by a winged alien who appears and disappears from nowhere. The man uses deadly knowledge, acquired in a deal with a machine-like entity that cost him his ability to experience emotions, to conquer multiple planets. The winged alien has a reason to persuade the man to return to the site of the bargain.

I have poorly explained the plot of the story because I found it difficult to follow. The author shows great imagination in creating a universe full of strange aliens and weird, gigantic devices that may have motivations of their own. The background supplies an enticing sense of otherness, but at the expense of clarity.

“Timekeepers’ Symphony” by Ken Liu consists of four fictionalized essays (or movements, given the work’s metaphorical title) dealing with time. Human beings alter the speed at which they live, in order to study alien lifeforms that exist at widely varying rates. A structure on the Moon in the form of an enormous sundial also preserves records of the various ways people have created ways to kill other people, always with good intentions. Voyagers travel in generation ships from one colony world to another, adjusting to new ways of measuring time but carrying old timepieces with them. A facility on Hawaii maintains a timekeeper for all the planets humanity has settled.

The reader is likely to be in awe of the author’s obvious intelligence and erudition. The text is full of cultural and scientific allusions, revealing wide-ranging knowledge. There is also a wealth of richly imagined fictional visions of the future. Given the encyclopedic narrative style, this is a work more to be admired than loved.

Victoria Silverwolf has lots of clocks at home.