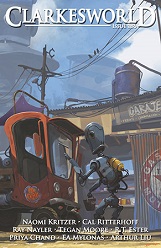 “The Dragon Project” by Naomi Kritzer

“Saturn Devouring His Son” by E. A. Mylonas

“Rain of Days” by Ray Nayler

“The Memory of Water” by Tegan Moore

“It Takes a Village” by Priya Chand

This issue of Clarkesworld is larger than some, offering 6 short stories and 2 novelettes. The first two thirds of the issue is very good, though the concluding third is much less strong.

“The Dragon Project” by Naomi Kritzer is a brightly told and engaging story about a bioengineer who makes their living 3D-printing inventive animals for clients. When she and her business partner are asked to provide a ‘dragon’, several difficulties arise. The author keeps the mood light and wryly amusing, and the idea is sufficiently novel to keep the reader interested.

“Saturn Devouring His Son” by E. A. Mylonas is in many ways, terrific. Dystopian, and otherworldly in tone, it is at the same time extremely mundane, reading like a modern Orwellian tale. It’s also bleakly tragic. A man returns to his hometown to attend his father’s funeral. The town is utterly dominated by the local meat processing company, and its harrowing disregard for the workers and their safety. Workers appear to systematically lose limbs in awful accidents but are, in the main, accepting of their awful fate. The writing is good, and the characterisation is strong. This can doubtless be read as allegory—perhaps reflecting the need to escape from the constraints and drudgery of living the life expected. A successful, albeit rather grim tale.

“Rain of Days” by Ray Nayler is an intriguing short story, set in a converted lighthouse that now serves as a seniors’ residence and hospice. An aging woman struggles to remember her past with her deceased wife and is taking memory therapy classes somewhat against her inclinations. Served by robots, the few residents of the home seem to be more-or-less abandoned by the world, so the value of their memories is paramount. It’s a thoughtful piece, though like the preceding story, it’s rather downbeat.

“The Memory of Water” by Tegan Moore is an engaging science fantasy novelette. In an all too depressingly-likely future, most sea creatures have become extinct. At an ocean-world theme park, a famous ecologist is visiting to give a lecture to commemorate the death of the last whale. Unfortunately, aspects of the holographic displays at the park appear to be malfunctioning at the time of his arrival. The overall impression from the story is one of sadness. The author wrings the most from the scenario, not from speculative ‘hard’ SF, but from a more fantastical story arc that questions how much we really understand of the complexities of life on the planet.

“Wanting Things” by Cal Ritterhoff is witty, wise and highly enjoyable. The title refers to the desires of advanced household AI machines in a young woman’s home. The Household Management System observes its owner’s various emotions as she charts her way through her relationship and desires a similar set of experiences. When the same AI then falls for the house toaster, the complexities of relationship management bring significant challenges. On the one hand, a love story between a house management AI and a toaster may seem silly, but the author manages this well by both playing on the absurdity with jokes, while also introducing depth and ultimately developing a genuine emotional impact. It’s an extremely able feat to combine humour and pathos this successfully, and the story is recommended.

“It Takes a Village” by Priya Chand makes a false start, by explaining that a litany is always said to the children on a spaceship, using exactly the same words, so they can properly understand what happened in a certain disaster. The problem is that the litany we then hear is extremely vague and unclear, presumably to keep the reader interested (though it has the opposite effect). A purposeful lack of clarity rarely confers merit to a story and, unfortunately, precious little in this tale rings true. Predominantly an exploration of gender politics, this story didn’t really appeal.

“Meddling Fields” by R. T. Ester requires considerable effort from the reader to work out what’s going on. On a colonised world sometime in the future, a meteorite collision fragmented spacetime, creating other ‘strands’ within which people known as ‘meddlers’ live, speaking a pidgin dialect. An inspector arrives at one such strand to investigate whether any meteorite fragments are being held against regulations at the meddler’s homestead. Once a certain amount is understood of the unusual world, the short story picks up somewhat in interest, but it remains too obscure throughout. Too many ideas (some of which seem good) are thrown at the reader here with little or no explanation. The story would have suited a novella better, perhaps, as the longer format would have allowed more exposition and scene-setting; the intrigue here needed more room to breathe.

“Commencement Address” by Arthur Liu (translated by Jaiyue Zhu) fails to convince, as it lacks focus, contains innumerable non-sequiturs, and presents its story through a series of stream of consciousness thoughts and memories, punctuated by an italicised history of a memory acquisition invention. The point of the story (or even what the main plot is) is not clear; this could be considered post-modernist in style, or simply not very good, depending on one’s literary inclinations.