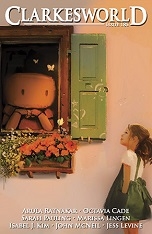 “You’re Not the Only One” by Octavia Cade

“The Old Moon” by John McNeil

“The Plasticity of Youth” by Marissa Lingen

“The Directions of Clocks” by Jess Levine

A novella, a novelette, and five short stories appear in this issue.

The title character in “The Massage Lady at Munjeong Road Bathhouse” by Isabel J. Kim is a widow with a young daughter. She discovers that she has the ability to perceive translucent scales on the skins of her clients, which she removes by rubbing them away. In some unexplained manner, this allows clients to alter their futures. (If left on their skins, they harden and become opaque, removing the possibility of change.) The protagonist faces a difficult choice when the owner of the bathhouse, who can also see the scales, makes her a business offer.

The premise is interesting, if somewhat vague. The characters are fully developed and sympathetic. The mysterious scales appear to be a metaphor for the decisions people must make that have major impacts on their lives. In all other ways, the story is completely realistic, and might be more effective as mainstream fiction, as the fantasy content is not a critical part of the plot.

In “You’re Not the Only One” by Octavia Cade, two people share their disappointments. A man who expected to be sent on a spaceflight to the Moon has his journey delayed for an indefinite time. A woman in the last stages of pregnancy knows that her child will only live for a very short time after birth. In various ways, they deal with their sorrow.

Despite the theme of lunar colonization and a future of climate change, the science fiction content of this story is irrelevant. If the man’s voyage were changed to something more mundane, the plot would be almost completely the same. Other than that, the story is well-written and has strong emotional appeal.

The main characters in “The Old Moon” by John McNeil are a robot and a sentient plant. For their own reasons, they inhabit a space station far from their native worlds. Conversations between the two lead to a conflict between the robot and the machines it thinks of as its parent and sibling.

The nonhuman protagonists are intriguing, if not always completely convincing. Despites its intelligence and ability to speak, the alien plant seems little different from ordinary Earth flora, so the concept borders on the ludicrous. Perhaps the most interesting aspect of this story is the fact that the plant is a materialist, while the robot believes itself to be a spiritual being.

“Babirusa” by Arula Ratnakar alternates two very different sections of narrative. In one, three beings find themselves in a series of six-sided chambers connected by staircases, and explore their bizarre world in an attempt to understand themselves. In the other, a young man tries to help his sister, who has had part of her mind altered after she was convicted for a crime. The two narratives come together when the nature of the three beings and their environment is revealed, and the truth about the sister’s crime comes to light.

This is a very superficial description of a dense and difficult novella, full of abstruse mathematical and biological content. The complexity of the concepts involved requires characters to speak in lengthy expository dialogue, often for several paragraphs at a time. The story also features quite a few diagrams, so that at times it reads like a textbook. One must certainly admire the author’s intelligence, but readers are likely to find reading this work a long, hard hike up a steep trail.

“The Plasticity of Youth” by Marissa Lingen begins with a pregnant woman discovering a raven eating the tires of her car. When the baby is born, it eats moss that gives it the ability to excrete plastic from its body. These changes suggest that the next generation will be very different from its predecessor.

This story appears to be a response to the omnipresence of microscopic particles of plastic in the environment. The premise is a unique one, but strains credibility.

“Informed Consent Logs from the Soul Swap Clinic” by Sarah Pauling takes the form of conversations among two women about to switch bodies and the technician supervising the procedure. One of the women is a glamorous celebrity, the other a scientist who gave up her work after marriage. The story delves into the reasons the women agree to trade minds, and reveals the technician’s own experience.

The author reveals great skill in delineating character through dialogue. This very brief tale is expertly crafted, if little more than a bagatelle.

In “The Direction of Clocks” by Jess Levine, a woman attempts to escape her painful life by accepting a position as the sole occupant of a starship travelling close to the speed of light. Because of the extreme velocity, only three years go by for her, while nearly a century passes on Earth. Upon arrival, a change in policy regarding relativistic journeys makes it seem that she will be forced to spend the rest of her life in a claustrophobic space station. An unexpected encounter with someone from her past offers another possibility.

The concept of time dilation at great speed will be familiar to most readers of science fiction. In this novelette, the premise seems to be used as a metaphor for running away from one’s problems. Readers may find it difficult to empathize with a character who turns her back on all her friends and relations in what is essentially an act of symbolic suicide.

Victoria Silverwolf is oddly amused by the fact that the longest story in this issue has the shortest title, and vice versa.