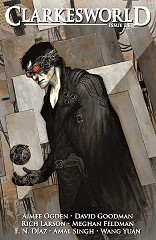 “The Cold Calculations” by Aimee Ogden

“Other Stories” by Wang Yuan

“A Series of Endings” by Amal Singh

“Beneath the Earth Where the Nymphs Sleep” by Meghan Feldman

“You Are Born Exploding” by Rich Larson

Two novelettes and five short stories appear in this issue.

The title of “The Cold Calculations” by Aimee Ogden alerts the reader that this story is a direct response to Tom Godwin’s famous tale “The Cold Equations.” As in the earlier work, the plot deals with a young female stowaway on a spaceship who must be sacrificed to allow the vessel to complete its voyage. Alternating with this updating of the older story are narrative sections dealing with other people in the past who have lost their lives to unsafe conditions, as well as brief segments in which the author addresses the reader directly, urging action against those responsible for such situations.

This work is more of a polemic than a fully developed story. As such, it makes the very important point that lives must not be sacrificed for economic or political gain. The author offers clever and thoughtful variations on Godwin’s premise, but the resolution comes out of nowhere, and is left unexplained.

The narrator of “Vegvísir” by David Goodman is trapped on the surface of Mars when his land vehicle breaks down. A magnetic sandstorm makes calling for help impossible. His only hope is to reach an abandoned station before he runs out of air. Help comes in an unexpected way.

Most of the story reads like hard science fiction, with a very convincing portrait of a colonized Mars undergoing the early stages of terraforming. A touch of fantasy at the end seems out of place. Perhaps the most interesting parts of this work are those dealing with Icelandic culture, the first settlers of Mars having come from that island nation.

The novelette “Other Stories” by Wang Yung, translated from Chinese by Andy Dudak, consists of alternating sections of narration dealing with a science fiction writer dying of cancer; excerpts from one of her novels, which parallels an important part of her life; and the woman’s adult son, a scientist working on a very limited form of time travel. The man uses the technology, which can only go back in time a short distance, and only make trivial changes in the past, to improve his relationship with his mother.

I have not mentioned an important part of the plot, involving the man’s father, as well as his relationship with his wife. This part of the story is the most emotionally powerful aspect. The time travel premise, on the other hand, seems implausible in an otherwise realistic tale of family relationships.

In “A Series of Endings” by Amal Singh, a man experiences many different lifetimes, all starting from the same point in his childhood. Some of these involve his voyage to the moons of Jupiter, where he encounters aliens. Another reads like a sword-and-sorcery adventure, while others are more mundane.

Although inconsistencies among these multiple lives are inherently part of the theme, it may disconcert readers to have the aliens appear on Europa in one lifetime and on Ganymede in another. Despite the story’s science fiction and fantasy trappings, the most interesting part may be a boat race when the protagonist is a boy.

“Beneath the Earth Where the Nymphs Sleep” by Meghan Feldman has a dense plot and a detailed background that are difficult to describe briefly. Suffice to say that the main character escapes from a place where she was forced to aid in developing genetically engineered organisms through implants in her brain. She then lives elsewhere, with the possibility of gaining a greatly extended lifetime in order to make it a better place for those in the future.

The treatment against aging has serious consequences, making it more of a sacrifice than a benefit. A meeting with the ruler of her former homeland, and the discovery of what happened to her sister during her escape, lead her to make the decision of whether to accept the burden of near immortality.

This short story has the complexity of a novel. It requires very close reading, and one is likely to be confused at times. The author definitely creates an original and striking setting. The strangeness of the advanced technology in this future world gives the feeling of fantasy, which the reader may or may not welcome.

“You Are Born Exploding” by Rich Larson is the issue’s longest story. It reveals its speculative premise only slowly, but it is probably not giving too much away to say that it involves a viral plague, apparently sent from outer space, that changes people into aquatic animals that feel compelled to enter the sea, never to be seen again. The plot deals with a woman whose young son is infected with the disease, and how she deals with his impending transformation.

Despite the extraordinary premise, for the most part this work reads like mainstream fiction, with only a few futuristic details. The metamorphic disease has effects on society that resemble those caused by the current pandemic, which is probably intentional. The characters are fully developed, and their day-to-day interactions are more compelling than the science fiction aspect of the story. What the mother decides to do at the end is predictable.

“Just One Step, and Then the Next” by E. N. Díaz takes place in a Latin American nation during a military coup. An elderly woman loses contact with her son during the ensuing violence and oppression. She makes a modest attempt to find out what became of him, inspiring others to do the same, although she must pay a terrible price.

Despite what seems to be an imaginary setting, there is no real speculative content. The story is best appreciated as a work of political fiction. It offers an inspiring heroine, whose actions reveal true bravery.

Victoria Silverwolf is not brave.