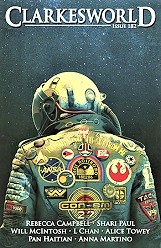 “Mom Heart” by Will McIntosh

“This Stitch, This Time” by Anna Martino

“The Death Haiku of the Azure Five” by L Chan

“City of Eternity” by Pan Haitian

“Between Zero and One There is Infinity” by Shari Paul

Five short stories and two novelettes appear in this issue.

The narrator of “Mom Heart” by Will McIntosh is a man whose wife dies suddenly, leaving him with two young daughters. One of the girls is autistic, and retreats into herself completely after the loss of her mother. Desperate to save her from being institutionalized, he alters a cleaning robot so he can speak through it in the dead woman’s voice. Although this helps the girl out of her depression, it alarms the school authorities. He also faces the problem that he cannot keep this subterfuge going forever.

It is important to note that this is not a story about uploading the woman’s mind into a computer, and that the robot is not an artificial intelligence, but just a machine. This makes the story much more believable than many tales with similar themes. The way that the narrator deals with the school is clever and plausible, and the story manages to touch the emotions without being excessively sentimental. The ending suggests the possibility of a touch of fantasy, but it also allows the reader to interpret events in a way that avoids the supernatural.

There is no ambiguity about the way that “This Stitch, This Time” by Anna Martino combines science fiction and fantasy. A woman who works on machines that make spacesuits for astronauts also uses an old-fashioned sewing machine in her spare time. She receives messages from her dead grandmother in the form of Morse code in the stitches that the machine produces. These warn her that a planned voyage to Mars will fail. Trying to warn her superiors about the impending disaster leads to further difficulties.

Although the story is quite serious, the premise may strike some readers as bordering on the ludicrous. If one can accept this method of communicating with the dead, the rest of the plot is plausible. The protagonist and her fate are reminiscent of a tale from ancient Greek mythology, which may or may not be a deliberate allusion.

In “The Language Birds Speak” by Rebecca Campbell, a young boy has serious problems with speech. He is only able to say a few words, but also produces sounds unlike anything found in any language. His mother, who has her own difficulties with words, enrolls him in a special study at an institution dealing with similar children. The place turns out to be much more than it seems to be, and she learns something about her own background.

The first part of this novelette is believable, and the problem that mother and son share draws the reader into the story. Later plot developments become more melodramatic, involving a secret organization and what are essentially superhuman powers. The author deals with the problem of conveying words not found in any language through the use of blank spaces between brackets, leaving it to the reader’s imagination. Whether this technique works or not may be a matter of taste.

The multiple narrators of “The Death Haiku of the Azure Five” by L Chan are artificial intelligences, fighting an interstellar war against other such entities. They narrate a massive space battle in which they are involved, while producing the tiny poems mentioned in the title.

It took me a while to realize that there was not just one narrator, and it is possible that I am still mistaken. This is because all the various voices sound the same. This may be appropriate for a group of AIs, but it also makes them flat, uninteresting characters. Fans of military space opera may enjoy the detailed descriptions of battle, but others are likely to find the story uninvolving.

Another AI is the narrator of “Dark Waters Still Flow” by Alice Towey. It controls the water supply of a community on another planet, while daydreaming about being a human being and reading literature. A mysterious series of malfunctions brings it together with a technician who is a descendant of refugees. The reason for the problems threatens both with danger.

The author does a fine job of telling the story from the viewpoint of a rather wistful artificial intelligence. To accept the premise, you have to believe that a person with a high degree of responsibility resents the descendants of the refugees so much that sabotaging the water supply and blaming it on them seems like a reasonable solution. (It may be of note that a traditional part of the culture of the descendants is the wearing of gloves and scarfs. It is possible that this is intended to suggest the controversy about the wearing of the hijab among Islamic immigrants in some nations, or it may just be my imagination.)

As a change of pace, “City of Eternity” by Pan Haitian, translated from Chinese by Carmen Yiling Yan, is pure fantasy. A soldier accompanies a princess, the last survivor of a conquered nation, across a remote wilderness. They encounter sages who live extremely long and slow lives. By eating the fruit of knowledge, they are able to perceive the rise and fall of an entire microscopic civilization. Each must then decide whether or not to eat the fruit of eternal life.

This story reads like an elegant example of sword-and-sorcery fiction, with a special flavor that is likely to be new to many Western readers. The scene involving the tiny inhabitants of a world smaller than a grain of sand is fascinating, and the rest of the tale is equally imaginative.

The novelette “Between Zero and One There is Infinity” by Shari Paul has a complex backstory that is not fully explained until well into the narrative. In brief, humanoid aliens take over a dying human colony on Mars. Although the two species get along fairly well, there is a resistance movement intent on removing them from the solar system. Other beings known as Whistlers are obsessed with destroying the aliens. Most of the aliens flee these dangerous enemies, but many remain.

Against this background, the plot begins with the consciousness of a dead human child, who had been adopted by two aliens, downloaded into a robot body. Accompanied by a resistance member who wants to give her freedom, she becomes involved with so-called pirates (humans not allied with the aliens or the resistance, or any other faction) on Venus. Her adventures lead to battle with the Whistlers, revealing both the true nature of these relentless beings and the secrets of her adoptive parents.

As this synopsis may suggest, the story is a complicated, fast-moving one. Its flashback structure makes it somewhat difficult to follow. The climax is one of violent action, so it may appeal best to readers of space opera.

Victoria Silverwolf has to remember to turn the clocks back next Sunday.