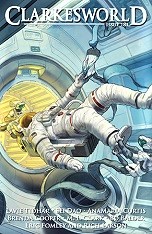 “Paper of Elephants” by Brenda Cooper

“Legend of the Giant” by Fei Dao

“A Well-Worn Path” by AnaMaria Curtis

“The Answer Was Snails” by Bo Balder

“Through” by Eric Fomley and Rich Larson

Half a dozen short stories and a novelette, all science fiction, appear in the latest issue of Neil Clarke’s online magazine.

In “Paper of Elephants” by Brenda Cooper, a brother and sister manage an elephant sanctuary, always desperate for money and fearful of poachers in search of ivory. They raise funds by hosting tourists and selling the paintings created by one of the elephants. The brother comes up with the idea of burning the physical paintings and selling digital images of them instead. The sister is reluctant to destroy the paintings, and fails to see why people would pay for things they can see for free, but discovers a way this apparently impractical idea can work.

Set in the very near future, this realistic story features highly plausible speculation. The method by which the sale of virtual images becomes profitable is believable, and makes the important point that the human factor is necessary to make proper use of technology.

“Legend of the Giant” by Fei Dao, translated from Chinese by Ken Liu, takes place at a time when humanity no longer inhabits Earth. A huge robot, programmed for construction, wanders the planet, destroying buildings and recycling the material into glassy bricks. He converses with a tiny machine about the meaning of life, encounters a war robot disguised as a building, and confronts the strange, bubble-like beings who have replaced human beings.

As this synopsis may indicate, the author has no lack of imagination, and the story is full of exotic details. The robots are fully developed characters, although the bubble entities remain an enigma. The presence of a giant, transforming robot, familiar from popular culture, contrasts oddly with serious musings on philosophical themes.

The protagonist of “Rain Falling in the Pines” by Lavie Tidhar is a Neanderthal, one of many such recreated through genetic engineering. He obtains a large egg originating in the depths of space, not knowing the immense power it contains. Large numbers of people, often biologically modified in extreme ways, seek the egg, leading to assassination attempts, chases, escapes, and the revelation of the egg’s secret.

Best described as biopunk, this action-packed story creates a complex, bizarre future. Most of this is acceptable, if one is willing to suspend disbelief in highly advanced biotechnology. However, the origin of the egg takes the plot into much stranger, almost Lovecraftian territory, which may be asking too much of the reader.

In “A Well-Worn Path” by AnaMaria Curtis, a woman who left her native planet in order to explore other worlds returns to visit her older sister, who failed to qualify as a space traveler and had to remain at home. A walk in the woods in order to obtain delicious berries that grow on plants with deadly thorns reveals the truth about how the younger sister succeeded.

With only two characters, the story works best as a study in the interactions between the sisters, who display both affection and resentment. The key plot element of the wonderful-tasting fruit that is likely to lead to the death of those who harvest it strains credibility. Although the gatherers take precautions, these seem insufficient, given the extreme danger.

The narrator of “The Answer Was Snails” by Bo Balder is trapped in an artificial environment by a giant alien, like a specimen in a terrarium. Separated by a glass wall from the only other human being present, the protagonist struggles to find a way to join her.

The author vividly conveys the narrator’s desperate efforts to survive and reach the other prisoner. Given the setting’s resemblance to an ordinary terrarium, as well as the presence of the giant snails that give the story its title and which play a major part in the protagonist’s escape plan, the plot sometimes verges on the ludicrous, resulting in unintended comedy.

The issue’s longest story is “Love Unflinching, at Low- to Zero-G” by M. L. Clark. The main character is a veterinarian on a space station that serves as a meeting place between humans and other sentient beings. Many of the inhabitants have animal companions as well. A possible diplomatic crisis arises when a bioengineer alters plant-like alien pets in such a way that they have faces, meant to appeal to human owners. The inhabitants of the planet that produces these animals consider caring for them a sacred duty, and might find this transformation unforgivably blasphemous. The veterinarian comes up with a solution to the problem, involving another species of alien.

This is a pleasant story to read, particularly for those who care for animals. The characters are appealing, and life on the space station is convincingly portrayed. It may be hard to believe that so many animals would be aboard the space station, with a subplot involving horses being shipped to a human colony world particularly difficult to accept. (This part of the story is irrelevant to the main plot.)

In “Through” by Eric Fomley and Rich Larson, a man is held prisoner in a minimally furnished glass cube, his only contact with other people infrequent inspections by hooded guards with lamprey-like symbionts. An unexpected visit from someone in his past, whom he cannot fully recall, is the first step in his escape.

The surreal nature of the prison creates an effectively eerie mood. Readers familiar with a certain common theme in science fiction will probably figure out what’s going on before the protagonist does.

Victoria Silverwolf has been to a Thai restaurant that had paintings by elephants hung on the wall.