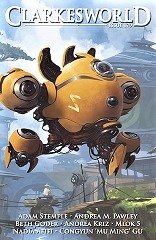 “The Clock, Having Seen Its Face in the Mirror, Still Knows Not the Hour” by Adam Stemple

“A Heist in Fifteen Products from the Orion Spur’s Longest-Running Catalog” by Andrea M. Pawley

“An Instance” by MLOK 5, (translated by Julie Nováková)

“Resistance in a Drop of DNA” by Andrea Kriz

Thoughtful and quite inventive, “Candide; Life-” by Beth Goder poses questions about artistic originality and the value of self as it relates to what we create. In a future of advanced technology, art in the form of music or sculpture can be imbued with ‘emotion capture’ to provide multimedia forms that present specific emotional states of the artist. The story takes a snapshot look at the relationship between a young female musician and her sculptor boyfriend, and their multimedia art. The tech ideas are interesting, and the future world is well rendered, providing an interesting backdrop to this rather slight, but enjoyable story.

“A Thousand Tiny Gods” by Nadia Afifi is a short story set in modern Bahrain. A programmer at a government-run nanotechnology institute is developing tiny nanobots as internal medical treatments. When a senior government minister’s estranged wife approaches the institute for experimental treatment of her lung cancer, the programmer becomes highly invested in developing a nanotech cure. The strengths of the story lie in the characterisation, the well-written prose, and particularly, the interesting backdrop of modern Bahrain. Some descriptions of the actual nanotechnology suggest the author is not especially familiar with the tech’s parameters, but it’s a minor gripe of an otherwise enjoyable tale.

“The Clock, Having Seen Its Face in the Mirror, Still Knows Not the Hour” by Adam Stemple is an engaging steampunk novelette. An old brass and steel clockwork man, missing his limbs, sits in a market stall as a curiosity to attract vendors. Eventually bought by a wealthy young woman to be her companion, the story comprises a smattering of the clockwork man’s most valuable memories and various existential discussions he holds with his ‘master’. While the subject matter may sound somewhat derivative, it is written in a fresh and involving style and is bright and entertaining. The thoughts and opinions of the robot are often humorous, offering wry reflections on humanity, as well as providing the story with pathos and depth. Recommended.

The novella “The Serpentine Band” by Congyun ‘Mu Ming’ Gu is a Chinese fantasy or slipstream tale. The novella starts rather confusingly, with a prelude that doesn’t aid the reader’s understanding of what’s to come. Following this, a young girl, Chen, is given a strangely twisted jade band with impressive inscriptions and drawings on it. She cannot understand how it was made, or how it intrudes on her dreams, but we learn that it exploits a principle of twisted space. The tale then jumps back and forth, comprising dramatic vignettes touching on the reality of space, recounting the role of characters in local government, and presenting existential conversations between Chen and her father. All-in-all, the story is rather a thematic muddle. Dream-like in its episodic, disjointed telling, the tale is overly long, struggles to maintain interest or impact and left this reader confused and bored.

“A Heist in Fifteen Products from the Orion Spur’s Longest-Running Catalog” by Andrea M. Pawley is an entertaining and humorous SF short story. The young boss of the ‘Tollnacher Stimmacher’ manufacturing company sets out to rescue her adoptive mother—a robot who ran the company before her—who has been imprisoned on a secret planet. Told in short sections that are each introduced with the description of a particular ‘Tollnacher Stimmacher’ product used in the rescue, this is a fun read, with an inventive story structure.

“Resistance in a Drop of DNA” by Andrea Kriz is perhaps alternate history SF, as it concerns the use of DNA manipulation and plasmids but appears to be set during the French resistance. This discrepancy, if it is one, is not resolved or explained, leading to a sense of mystery regarding the timing and meaning of this brief story.