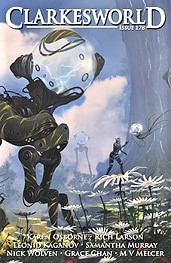 “Promises We Made Under a Brick-Dark Sky” by Karen Osborne

“When the Sheaves Are Gathered” by Nick Wolven

“Preserved in Amber” by Samantha Murray

The 178th issue of Clarkesworld contains seven stories, including two novelettes. One of the better issues I’ve read.

“Promises We Made Under a Brick-Dark Sky” by Karen Osborne

This short science fiction story takes place in a future where the people in a city live under a dark-sky dome and follow the cyber god’s dictates. A pestilence is taking hold and Elissa fears for her baby daughter. For now, the fisher-monks protect her and use some of her unique skills to talk to the cyber god.

And then, one day, she decides to kill the god in the hope she can break the sky and fashion a better life in the aftermath. As her friends discover what she has done, they think she is sending them to hell. But she believes they were already there.

This was an interesting story that the author told from an unusual perspective, which gave the subject fresh legs.

A young bio-engineered man is the Solar System’s star dancer in this SF short. The product of the gamete farms, Yennie trains tirelessly to stay at the top, like a water lily or was that pond scum.

Once, he wanted to be a star, but now he doesn’t. They force him to train for eight hours a day in his dome on Saturn’s snowball moon, Enceladus, and then they project him all over the system. Meanwhile, his able robotic assistant manages his life to the minute.

Then they assigned a different therapist to work with him. And a new chance at life comes into focus.

This was a character-driven story that portrays a future where humans again become commodities. It presented an interesting perspective on human engineering.

“When the Sheaves Are Gathered” by Nick Wolven

Johnny is confused as various people he knows disappear in this SF novelette. The strange thing is, he can’t fully remember them but feels the hole in his memory where they once were. He thinks some of these people were past lovers.

And then more people vanish, people he doesn’t know. And the city he lives in falls into slow ruin as it runs low on people to run and maintain it. Still, Johnny remains, moving between deserted apartments. Throughout it all, he keeps hearing a strange and old song about gathering the sheaves. Can this be related to the vanishings from both his world and from his mind?

The author developed the story with plenty of mystery to keep the reader engaged. However, the speculative SF elements were light.

“Preserved in Amber” by Samantha Murray

The VAST appears in orbit over Australia in this SF novelette. The alien spaceship communicates through a tonal message that human scientists struggle gamely to decipher. Otherwise, the ship hangs in space, doing nothing that anyone could construe as hostile.

Even as the orange-colored craft waits, members of the eight thousand begin preparing to join the spaceship on one final journey for the sake of humankind. Niu Yi is one such member, chosen by lottery for her diversity. She visits her grandmother, who still lives in a remote village and where she learns a few last lessons about her ancestors. And maybe she can take a couple of special gifts with her, even though the alien craft will only allow biological material to pass through its membrane.

The author built a wonderfully involved look at a possible future, holding back its secrets as the story evolved. A very nice and captivating story told with a time dislocation that isn’t apparent at first.

People invent the time-travel clip in this short SF story. With the clip, people can skip forward any amount of time from minutes to millennia or more. At first, the invention is helpful for those waiting for help, like a future cancer cure.

But it’s too easy and convenient. Who hasn’t felt depressed or lost at some time, and now they can skip ahead, hoping things will be better. And so, it does not take long for the true price of such an invention to become apparent. For one young man, his small jumps expose him to considerable danger and climate changes. So, he goes for something much longer.

The author took an intriguing concept and explored its consequences in a fast-paced plot.

In this refreshing SF short, they are in the clutches of the black hole that still eats the solar system. It’s been generations since Noah built the spaceship that allowed them to escape the collapsing home planet. And they remain trapped by the equation that defines gravitational attraction. They can only control their mass and must throw some off to maintain their orbit around the monster.

One of the female inhabitants grows up to become an engineer responsible for maintaining the ship’s engines and calculating the gravitational imperative. Can they maintain orbit with this mass, or must they release another ring with ten thousand lives to fall toward the event horizon? As a new engineer, she had understood the decision to release the lowest ring, even though it contained her grandparents. Now, as the chief engineer, she saw the possibility of discarding enough rings to escape the monster forever, but could she condemn half a million people?

This was one of those all too rare stories that approached a scenario from a new perspective. It was interesting, mysterious, and refreshing.

In this SF short, set in the near future, Ned has a psychological problem. Not that the authorities care; after all, they put it there. Ned is the new kind of one-shot weapon. They send him out to find and destroy an enemy cache of people like himself.

Ned’s family has a problem too. What happens with the one-shot weapon after using it?

This story was for readers who enjoy solving puzzles. It may need an additional read to comprehend its message fully.

You can follow Kevin P Hallett’s writing on www.kevinphallett.com.