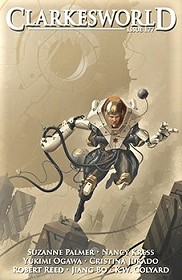 “Bots of the Lost Ark” by Suzanne Palmer

“The Shroud for the Mourners” by Yukimi Ogawa

“Our Fate, Told in Photons” by K.W. Colyard

“Embracing the Movement” by Cristina Jurada, translated by Sue Burke

Clarkesworld this month offers several stories by notable, award-winning SF authors, as well as stories by some who will be less well-known to most readers.

“Little Animals” by Nancy Kress is a thoughtful, inventive and superior SF novelette. In the future, it is discovered that brain waves resulting from strong memories produce quantum signals which can be accessed by trained observers using specialised equipment. As the quantum entanglement that can be assessed from memories is independent of time, strong memories of historical figures can be sought, and their lives researched by historians. In the town of Delft, in the Netherlands, a small group of researchers are searching for Vermeer’s memories, but by accident they ‘find’ Maria, the daughter of Antonj van Leeuwenhoek, the father of microbiology and discover of bacteria (“little animals”). The story relates some of Maria’s strongest memories and draws parallels with the key researcher’s own troubled life. The scientific concept may sound far-fetched, but Kress does a good job of selling the idea, and its acceptance is aided by strong and engaging characterisation and a fascinating plot. Recommended.

“Poubelle” by Robert Reed is a far future SF short story that’s somewhat reminiscent of Cordwainer Smith, with its off-beat style and representation of humanity’s fate. The protagonist Poubelle is a mortal human, orphaned at birth and discovered, like a lost kitten, in a trash-recycler. She is taken in by the family of immortals who find her, but these superior ‘perpetuals’ (with bioceramic brains) treat all lesser mortals as animals, labelling Poubelle as their pet ‘moggie’. Poubelle sneaks out at night, like a cat, to explore the city in which she lives. One of the younger immortals, only a few hundred years old, misses her, and tries to intervene. This short story actually takes place in the same ‘Great Ship’ universe for which Reed is most well-known, though it stands alone well. The tale starts very promisingly and it’s more inventive and interesting than many stories, though the conclusion doesn’t quite deliver on the promise of the set-up, perhaps.

“Bots of the Lost Ark” by Suzanne Palmer is an SF novelette set in deep space. An old spaceship—badly damaged in a previous encounter with aliens and with its human crew now all in deep sleep—is slowly travelling to a jump point in alien space. During the 68-year voyage the ship’s been maintained (just about) by the ship AI and a large number of tiny robots. The bots seem to have become confused as to their purpose over the course of time, however, and have started forming bot agglomerations that they feel represent individuals from the sleeping human crew. The ship gets help from the one robot it can trust, Bot 9, to help it meet a significant challenge. This is inventive stuff, and also entertaining, as stories set on largely empty ships in deep space often seem to be. The story is also quite humorous, and Palmer has managed to invest both ‘Ship’ and Bot 9 with appealing characterisation. This novelette is certainly recommended.

As a translated story, “Face Changing” by Jiang Bo is a little hard to review, as one cannot be sure whether any criticisms should lie at the author’s door, or the translator’s. Suffice to say, this tale, about a financial policeman who works to catch white collar criminals through futuristic means, has somewhat limited appeal. Unfortunately, the prose and dialogue are clunky and unconvincing, making it is hard to engage with the underlying story, which is only of moderate interest.

“The Shroud for the Mourners” by Yukimi Ogawa is not a translated story, though unfortunately it reads like one. The story concerns a man who attends a doctor or craftsperson, at an ‘atelier’ to have his membrane patterns inspected or diagnosed. Pigment patterns of tissues and bones are important in this future, and a mysterious pigment appearance must be investigated. Some of the core ideas in this story seem quite novel, but they are largely obscured by a lack of clarity and weak character development. Indeed, the characters (some of whom are androids) are not especially distinct and it’s hard to root for any one character’s cause. This was a miss for me.

“Our Fate, Told in Photons” by K.W. Colyard is an interesting story, largely successful. It tells of twin sisters, seventh daughters of seventh daughters, who by family legend and prophecy are fated to see the stars go out twice. On their seventy-seventh birthday, the Pleiades do indeed ‘go out’, as a result of a supernova, which they witness from their distant home world. But how can they witness stars going out a second time? The tale ponders the nature of fate and how we spend our short lives, and successfully delivers pathos, especially at the end. It is told mostly in narrative exposition, with no dialogue until the conclusion, which perhaps makes for a drier tale with less character connection than might have otherwise been the case, but overall, it’s quite satisfying.

“Embracing the Movement” by Cristina Jurada is another translated short story (originally published in Spanish). The tale comprises the thoughts and philosophies and a powerful alien race who encounter a lone human ship amid an asteroid field. Told entirely from the single (alien) point of view, with no dialogue and no human characters, the story faces an uphill battle to engage the reader.