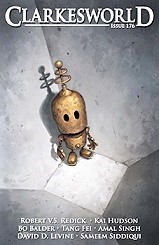 “A Home for Mrs. Biswas” by Amal Singh

“Dancing with Ereshkigal” by Sameem Siddiqui

“A Star for Every Word Unspoken” by Kai Hudson

Many of the stories in this issue deal with loss and loneliness, although the magazine begins with a tale with a lighter mood.
The narrator of “Best-Laid Plans” by
David D. Levine works with genetically altered mice on a space station, trying to find out if they can teach what they learn to others of their kind. An accident threatens to force an evacuation, but the narrator comes up with a wild scheme to save the station.

Although frequently humorous, the story never becomes silly. The speculative content is believable, and the narrator is a convincing portrait of a working scientist. The author manages to create a truly original version of problem-solving science fiction.

“A Home for Mrs. Biswas” by Amal Singh begins with an elderly woman winning a lottery that allows her to emigrate from a badly polluted Earth to a thriving colony on Mars. After a meteor destroys the spaceship, the story suddenly jumps forward in time. A teenage girl, who befriends the indigenous Martians, has dreams that relate to the life of the old woman. Multiple flashbacks reveal incidents in the woman’s life, while alternate sections deal with the girl growing up and journeying to Earth with a life-extending Martian substance.

The plot is more convincing as fantasy than science fiction, with its implied theme of reincarnation, sentient Martians, and miraculous life-extending substance. The author refers to the spaceships that travel between Earth and Mars as generation ships, in a way that contradicts the normal use of that term. Although well-written, with vivid descriptions, the story is never completely convincing.

“The Force Exerted on the Mass of a Body” by Bo Balder takes place on a planet with a gravitational pull more than twice as high as Earth’s. The narrator, supervising the harvesting of native trees that supply a substance necessary for interstellar travel, has to wear an exoskeleton to get around. Through a local inhabitant, she learns that starship technology has an unexpected effect on space itself.

Without giving too much away, one can say that the story depends on a premise that is very difficult to accept. Almost as implausible is the notion that a special kind of wood is needed for starships.

“Vanishing Point” by Robert V.S. Redick begins with a family fleeing violence in their homeland. Among their few possessions is a device that allows one to peer into the past and future. Both parents die during the journey. Their children, a brother and sister, grow up in a new nation. When a repressive government takes over the land, the sister leaves her lover and children behind to escape the oppressors. Years later she returns, to discover how the device changed the lives of herself and her brother.

The above synopsis fails to convey the depth and subtlety of a novelette with the complexity of a novel. The author creates three-dimensional characters, sometimes deeply flawed but always sympathetic. The story deals with many profound issues, from politics to family relations. The style frequently resembles stream of consciousness, but never becomes difficult to follow.

One interesting aspect of the plot, which takes place over several decades, is the fact that the author does not ignore the inevitable changes in technology over time, although the story is fantasy. At the beginning, motion pictures are a new novelty; by the end, self-driving cars exist.

The narrator of “Dancing with Ereshkigal” by Sameem Siddiqui addresses an ex-lover, relating an encounter with the Mesopotamian goddess of the underworld mentioned in the title. Despite this supernatural event, which may be imaginary, the setting is futuristic, set on the Moon and Mars.

These speculative elements are secondary to the plot, which is really just the narrator’s memories of a love affair, and regret for its ending. Although not without emotional power, the story could take place in modern times without changing much of its appeal.

In “Spore” by Tang Fei, translated from Chinese by Andy Dudak, a man who creates designs for tattoos that disappear after a few days meets a robot in the form of an attractive woman. During their encounter, the man relates his relationship with his father, who created the tattoo technology in response to an episode of mass violence. Later, he learns the reason the robot came to him.

The story’s speculative content is interesting and imaginative. Some readers may find the main character too self-pitying.

As a child, the protagonist of “A Star for Every Word Unspoken” by Kai Hudson displays both great mathematical genius and behavioral problems, possibly intended to suggest autism. Her mother works on a project to create a device, large enough to hold one person, that can travel instantaneously from one point in space to another. The woman dies in an accident, and her daughter grows up to work on the same project, using it in one final attempt to contact her mother.

The author obviously wants to break the reader’s heart, and does so effectively. The story walks a very thin line between genuine emotion and sentimentality. The sufferings of the protagonist in her desperate quest may be too intense for some sensitive readers.

Victoria Silverwolf had to change the filter on the house’s rainwater collection system today.