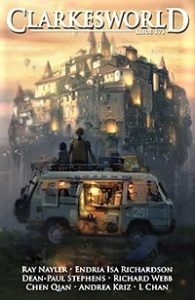 “The Sheen of Her Carapace” by Richard Webb

This issue of Clarkesworld offers 7 SF stories, ranging in length from a novella to a piece of flash-fiction. Only one of these stories was particularly enjoyable unfortunately, making it a weaker issue of the online magazine.

Clarkesworld kicks off this month with an entertaining and exciting SF story from Ray Nayler. A new colony-world explorer has his human ‘connectome’ sent by laser to a planet 300 light years from Earth. Unfortunately, his colleagues all die on arrival at the planet’s beacon, leaving him alone on a world that’s also far colder than expected. He must cross inhospitable glacial wastes to reach a forward supply depot before his suit’s energy gives out and he dies of cold and lack of food. As if this wasn’t challenging enough, is there something out there, ahead of him, on the glacier? The SF ideas here are inventive, striking imagery brings the frozen planet to life, and Nayler does well to maintain tension in what is ultimately a satisfying and memorable tale. Recommended.

Written in dense, purple-prose, the story’s meaning is hidden behind ill-chosen adjectives and masses of unnecessary detail, interspersed with sections of computer code. I found this short story, set in a dystopian future, to be quite unenjoyable and rather a slog to read, I’m afraid.

In “Ouroboros,” a cylindrical starship crosses the immensity of space, filled not with humans, who are now extinct, but with hundreds of human-derived, self-aware AI’s. The AI identities spend eons either in discussions among themselves regarding the existence of non-human sapience (which they seek) or ‘asleep’ to pass the time. As we join the cylinder, they are 3500 years out from ‘Omega’, and when they reach the planet, they will see how well advanced the sapient race is that lives there. At novella length, the story is overly long, and predominantly presented as arguments between different AIs through the ‘digital ether’, philosophising about the nature of sapience and discussing their ‘Programmers’ (i.e., humans) failing belief in other intelligences in the cosmos. The arguments are quite circular in nature, like an ouroboros, suggesting perhaps that nothing can be determined with certainty by argument alone, but requiring empirical proof. Eventually the AI cylinder ship reaches ‘Omega’ and debates start between the AI identities regarding when the sapient inhabitants (the ‘Tazinthe’) should obtain the AIs knowledge. The unending arguments about sapience and the AIs search for intelligence as a replacement for humanity is reflected in the story’s title; an ouroboros—the ancient symbol of a snake eating its own tail—traditionally represents infinity or something endless. This symbol also doubtless has association with the continuity of intelligence that is the function of the AIs. Unfortunately, the symbolic metaphor has another unsought function, as the story itself seems almost endless; it’s not especially engaging and out-stays its welcome. This is a shame, as some of the ideas on show are interesting and could have been deployed well in a much shorter, crisper story.

“The Sheen of Her Carapace” by Richard Webb

A new world called ‘Big Yellow’ is visited by the spaceship Perseverance, for reasons that are not explained. The story is told in the first-person by one of the ship’s gunners, and the whole narrative is delivered with his informal phraseology, short-hand, and slang, which leads to rather awkward prose; I’m not sure the approach works well in this story. The prose style aside, the story is not especially original, offering little that readers won’t have seen before. It also doesn’t really hang true; if a spaceship crew visited a new, habitable world containing a previously unknown sentient species, would they leave the study of that species to one military ‘grunt’ or would they allocate a team of xenobiology specialists selected from a crew numbering 150?

Set in 2089, this story concerns the crash-landing of some ‘interstellar beast-catchers’ on the alien world Lamo, where they wish to capture some ‘K Beasts’. The K Beasts can see 12 minutes into the future which makes their capture difficult. It’s not explained why they are called ‘K Beasts’ or how the team knows they can see into the future. Fortunately, the humans are able to learn the extra-terrestrial language of the local sentient aliens within 10 days, which is handy. These ‘Lamoan’ sentient aliens are not described or introduced; they just appear without preface to provide help. A difficulty in reviewing translations is that one cannot be sure if weaknesses in the story are due to poor translation or defects in the original story. While it would appear that the translation is indeed problematic—there are numerous strange quirks in the English—the story is also unconvincing, as the 12-minute future awareness of the K Beast creatures doesn’t logically hang together as a plot device.

There is a sentence early on in this story that runs, ““I don’t get it,” the Communist Computer Rap God said.” I could say the same regarding Kriz’ story, unfortunately. In the future, a YouTuber called Fabian sets up a YouTube AI personality called ‘Communist Computer Rap God’, ostensibly to help record an apology video on the social network that is designed to revive his declining channel. Stylistically, this would probably be described, charitably, as avant-garde, and indeed the style and plot may appeal to some. Less positive descriptions might be applied by readers for whom the uninviting style, lack of a plot and over-use of social network jargon do not appeal.

A short piece of flash-fiction, “A House is Not a Home” is quite reminiscent of Bradbury’s famous short story “There Will Come Soft Rains,” as it’s told from the perspective of an empty house AI, in this case after the ‘Resident’ has been forcibly removed. The problem with employing a similar plot device to that used in Bradbury’s story—one of the greatest SF stories ever published—is that the inevitable comparison is unlikely to favour the new tale. And while, to be fair, it’s not entirely derivative, it’s unfortunately too short to offer very much of interest to the reader.

More of Mike Bickerdike’s reviews and thoughts on science-fiction can be found at https://starfarer-sf.com/