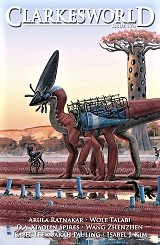 “Mamaborg’s Milk and the Brilliance of Gems” by D.A. Xiaolin Spires

“Homecoming is Just Another Word for the Sublimation of the Self” by Isabel J. Kim

This month’s issue consists of a novella surrounded by half a dozen short stories, like a hearty main course between appetizer and dessert.

The main character in “Mamaborg’s Milk and the Brilliance of Gems” by D.A. Xiaolin Spires is a woman whose body is contained within an exoskeleton. Having escaped from those who placed her inside it, she steals supplies from automated warehouses in order to survive with her newborn daughter. The exoskeleton forces her to go through a difficult and complex process to supply the infant with breast milk. She hopes to contact those who can remove her exoskeleton so she can feed the child in the normal way.

The theme of breastfeeding is unique in science fiction, as far as I know, and gives the story unusual emotional appeal. Some aspects of the plot, such as why the woman is trapped within the exoskeleton, are unclear. The story also lacks full resolution, as the fate of mother and child remains uncertain.

“Homecoming is Just Another Word for the Sublimation of the Self” by Isabel J. Kim takes place in a world like our own, but one in which people create duplicates of themselves when they emigrate from their homelands. The duplicates go on to live their own lives in their native countries. When an original and a duplicate meet, they reintegrate if they come into physical contact.

In this surreal setting, a woman who immigrated to the United States from Korea as a child learns of the death of her grandfather from her duplicate. She travels to Korea for the funeral, discovers how her duplicate’s life differs from her own, and learns of her grandfather’s dying wish, which forces her to make a difficult decision. The body of the narrative is interrupted from time to time with a folktale paralleling the events of the plot, and with accounts of the history of this strange parallel world.

The premise is quite obviously intended as a metaphor for the immigrant experience. The idea is an intriguing one, but the allegory may be too blatant for some readers. The rules of the duplication process, in which creating a copy requires intent on the part of the original, but combining them into one occurs only through touching, seem arbitrary.

“The Orbiting Guan Erye” by Wang Zhenzhen, translated from Chinese by Carmen Yiling Yan, is an old-fashioned problem story that would not have been out of place in the pages of Astounding during the Golden Age of SF. Two astronauts aboard a space station investigate mysterious small satellites orbiting the Earth. They contain peculiar cargo, from a fish in suspended animation to a flashlight. The pair manage to revive the fish and keep it as a pet aboard the station. It turns out to play an important role in their survival. Meanwhile, they discover the reason these miscellaneous objects were sent into space.

This story is very light entertainment, with extra appeal for those nostalgic for science fiction from the middle of the last century. The characters discuss a work by Arthur C. Clarke that parallels their situation. This knowing wink at SF fans is amusing, but detracts from the reader’s suspension of disbelief.

“Submergence” by Arula Ratnakar is a dense, complex novella, so any synopsis will fail to do it justice. In brief, the story involves the protagonist experiencing the memories of a dead woman through advanced neurotechnology. She discovers that the woman was investigating an extraordinary organism, newly discovered deep in the ocean. This organism, an unusual form of sponge, exhibits what seems to be purposeful behavior. Complicating matters is the fact that the sponge supplies a substance needed to cure a devastating disease. Important roles are played by the dead woman’s lover and daughter.

In addition to the basic plot, the author supplies a wide variety of speculative content, from young people refusing to speak or display emotion as a form of protest, to a secret language based on music. In particular, the biotechnology is detailed and convincing. The characters are fully developed, often finding themselves making difficult choices and experiencing regret for their actions. The story deals with many important themes, including love, betrayal, selfhood, and ethical dilemmas. It offers hard science fiction, sociological speculation, suspense, and human drama.

The setting for “55 Plaque” by Isabel Lee is a world like our own, but one in which alien plaques have arrived on Earth since 1879. Based on the mathematical pattern of the times when the plaques appear, the next one is expected to show up in 2021. These objects are accompanied by the sky turning pink, and bear inscriptions that advance human technology.

The protagonist is an elementary school teacher, instructing her pupils about the plaques. A crisis arises when one of her students turns out to be the daughter of members of a cult that denies the reality of the plaques. When a rally of the cultists assembles at the time the latest plaque arrives, the teacher struggles to protect the little girl from potential disaster.

The idea is interesting, and the theme of dealing with those who deny reality is certainly a timely one. (The way in which the parents object to having the plaques taught in school might also be read as an allegory for the controversy over evolution.) The story’s impact is lessened by the fact that the cultists are portrayed as stereotypical religious fanatics, wearing special robes and such. The parable might have been sharper if they had presented themselves as skeptics.

“Comments on Your Provisional Patent Application for an Eternal Spirit Core” by Wole Talabi takes the form of a document proposing a means of recording the minds of people, allowing others to experience simulations of those persons, after they are dead, within their own minds. Notes appended to the document from the inventor’s brother reveal the reason for the suggested technology.

The notion is a familiar one, although used in an original way. There is not much else to this brief work other than its premise and a revelation at the end that is predictable. The reader is likely to admire the clever structure of the story more than its content.

“To Study the Old Masters in the Prado at the End of the World” by Sarah Pauling takes place in Spain in the near future. Aliens arrive, and take over a cathedral that used to be a mosque, and before that an ancient temple. The narrative is interrupted by descriptions of paintings (including a fictional one created by one of the main characters) that continue the theme of one civilization taking over another multiple times throughout history.

Using an alien invasion as a metaphor for one nation conquering another goes back at least as far as 1898, with the famous H. G. Wells novel The War of the Worlds. (A much earlier, but lesser known, example would be Washington Irving’s satiric 1809 tale “The Conquest by the Moon.”) The use of paintings, and a touch of irony at the end, add some originality to this variation on an old theme, but otherwise it will seem familiar.

Victoria Silverwolf notes that two of these stories involve the Fibonacci sequence.