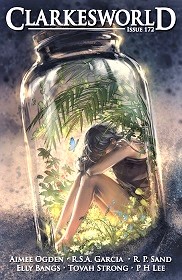 “Leaving Room for the Moon” by P H Lee

Four short stories, a novelette, and a novella appear in the latest issue of Neil Clarke’s award-winning publication.

“Intentionalities” by Aimee Ogden takes place in a future dominated by a giant business corporation. The protagonist, out of financial desperation, agrees to bear a child by artificial insemination for the corporation. After it reaches the age of five, it will have to leave its mother and become a worker in the company’s outer space mines. The story follows the main character’s decision to accept the corporation’s offer, her temporary experience of motherhood, and her fight to end the system that took her child away.

The author tellingly portrays the all-too-common experience of sinking deeper and deeper into debt, and the lengths to which people will go to climb out of it. The company’s purchase of children, clearly a form of slavery, is difficult to accept as plausible in a near future not very different from our own time.

“Deep Music” by Elly Bangs deals with small, intelligent creatures made out of water. The main character makes a living by removing these animals from places where they are not wanted and keeping them alive. A conflict with a rival involves an encounter with a former lover, and the explanation for the appearance of the strange organisms.

The premise is a unique and intriguing one. The antagonist is a caricature of a villainous businessman. The ending will seem familiar to many readers of science fiction.

“Philia, Eros, Storge, Agápe, Pragma” by R.S.A. Garcia is the magazine’s longest story. Any synopsis can only hint at its complex background and intricate plot. In brief, a woman mentally bonded to an artificial intelligence witnesses it undergo a sort of temporary death during a battle, crash lands on a planet and begins a romance with the man who rescues her, and confronts a relentless enemy bent on destroying humanity.

The author combines space opera, a love story, and speculation about the interactions between people and sentient machines. Adding to its complexity is the fact that it is narrated in the form of multiple flashbacks. This structure makes it difficult to follow. Although sections of text are labeled as “Now,” “Then,” and “Before,” it is not always clear what happens when.

“The Last Civilian” by R. P. Sand is a war story set on a planet where a human starship crash landed. The humans produce multiple generations of artificially grown soldiers to fight the planet’s alien-appearing (to our eyes) indigenous inhabitants. An unexpected friendship between two of these soldiers, one of whom has a secret role to play, leads to an encounter with the aliens and a greater understanding of the situation.

Although the story deals mostly with the relationship between the soldiers, it is narrated by one of the aliens, an unusual and interesting technique. (Conveniently, the aliens are telepathic.) The author has perhaps stacked the odds too greatly in favor of the peaceful, nature-loving aliens instead of the aggressive, polluting humans.

In “Aster’s Partialities: Vitri’s Best Store for Sundry Antiques” by Tovah Strong, a magician is executed for studying forbidden spells. By accident, her death creates the story’s narrators, beings who take the collective form of a house that devours those who enter. The magician’s ghost exists inside the house’s many mirrors. A child bearing one of the magician’s possessions enters the house, is protected by the ghost, and transforms the ravenous house in an unexpected way.

The author makes something new out of what might have been a typical fantasy. The way in which magic works in this story is more imaginative than completely logical.

“Leaving Room for the Moon” by P H Lee is a brief account of two children, sent to the court of the ruler of the universe after a voyage lasting many thousands of years. They survive by scavenging throughout the palace, and only meet the ruler after a very long wait. Later, they encounter a woman who can create anything by drawing it. She tries to recreate an object from their long-vanished culture, but cannot quite capture their memory of it.

The story has the feeling of a dark fairy tale. It seems to be an allegory for the inability to capture the past. Some readers may be frustrated by the lack of a full resolution for the protagonists.

Victoria Silverwolf is surprised that this issue does not include a translated story.